When you are raised by Holocaust survivors, you grow up with a unique sense of the scale of your problems.

“My parents lost all their family, and lost their faith,” Tika Benveniste, Ph.D., remembered. “So the usual childhood problems – you don’t like what’s being served for dinner, or your friend was mean to you – didn’t really resonate. I felt like I shouldn’t go to them for anything that wasn’t a serious crisis, so I grew up very independent.” 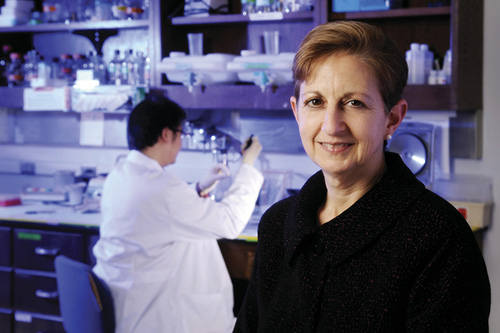 Multiple Sclerosis Center. Benveniste boasts a storied career which includes a role as senior associate dean for Research Administration and Development, and Founding Chair of the Department of Cell, Developmental and Integrative Biology. Her professional accolades and accomplishments are wide-ranging and significant.

But at the beginning of her life journey, as the daughter of Greek immigrants growing up in Oakland, California, she had no aspirations to become a scientist – much less a leader in her field.

As part of a small community of Greek refugees whose resettlement in Northern California had been sponsored in the aftermath of World War Two, her social environment was cloistered. The old traditions were restrictive, but the trauma that her parents had survived in Europe made Benveniste feel as if complaints were selfish. In addition, her autistic older brother required a great deal of attention – and then, when she was only 11, her father suffered a massive heart attack and, afterward, was too disabled to work. Benveniste’s mother, who had trained as a dentist in Greece, had earned a degree from UC San Francisco in dental hygiene and was able to shoulder the financial obligations for the family, but this left the young Tika with many of the household burdens.

“I took on a lot of adult responsibility,” Benveniste said. “I didn’t have much of a childhood, but growing up that way taught me a lot of lessons that have served me well.”

Perhaps in part to escape from this reality, her primary interests as an adolescent were “boys and fashion.” Still, Benveniste was a good student, and earned admittance to the elite University of California, Berkeley.

Benveniste was looking forward to starting afresh in college, housing with other like-minded students and enjoying some of the social liberties, such as dates, dances, and parties, that she had been denied growing up. But Berkeley was only 30 minutes away from her parents’ home, and the commute wasn’t prohibitive, so her parents announced that as a Berkeley student, she would be living with them.

This felt like an onerous restriction; Benveniste applied, late, to California State University, Chico, the aspirational college destination of her closest high school friend. Cal State Chico was three hours away. There was no way her parents could insist that she live at home if she was admitted there.

For a student who had been admitted to Berkeley, admittance to the academically inferior Chico was a step down. Benveniste’s parents were underwhelmed, both with the choice of college, and with the fact that she would be living a few hours away. Chico’s claim to fame, after all, was that it was the #1 “party school” in the nation. But that fall, when classes started, Benveniste was among the Chico freshmen.

“I didn’t know it at the time,” Benveniste recalled, “but it was a good move for me. I was a big fish in a little pond. I was more studious that most of the student body, I had smaller classes, and I was able to distinguish myself.”

Chico proved important for another reason: it was where she fell in love with science. She enrolled for what would prove to be a “fabulous” biology class, and that sparked an interest that would ultimately prove to be a lifelong passion. Later, a more advanced course in immunology helped her to narrow down her interest.

“This is the power of one person,” Benveniste stated. “The advanced immunology course my junior year was taught by a phenomenal professor, Alan Wilhelm. He made the subject come alive; it was just amazing. Because of him, I took every immunology class that I could.”

As it happened, Chico was one of only 15 universities nationwide that had an exchange program with the National Institutes of Health (NIH). Benveniste applied and was accepted to the program, and started an unpaid three-month internship in a top-notch immunology lab. At the end of those three months, she was hired at the NIH for another six months. At the NIH, she met scientists with doctoral degrees, and this solidified her decision to go to graduate school.

She was admitted to UCLA, which was her top choice. Benveniste started her doctoral work in 1979. She couldn’t have known at the time that it was a transformatively exciting time to be an immunologist.

She was only a year into her graduate work when a fellow student, Casey Morrow, recommended her to assist with research being conducted by a young physician/scientist named Michael Gottlieb. Gottlieb, had encountered a young, gay, male patient with unusual symptoms: unexplained fevers, a rash which later proved to be Kaposi’s sarcoma, and dramatic weight loss. Gottlieb theorized that the patient was immuno-suppressed, but didn’t know why.

Benveniste was drawn into the work. Ultimately, they worked with the blood from 4 patients, and in the lab Benveniste tried to identify the immune-related issues. The T-cells, she realized, which were essential to immune system defense, were missing. The researchers couldn’t definitively prove the reason for the absence of T-cells, but they speculated that a virus was to blame.

Ultimately, Benveniste and Gottlieb would serve as co-authors for a ground-breaking paper published in the Journal of Clinical Immunology, entitled, “Immunoregulatory T-cells in men with a new acquired immunodeficiency syndrome.” This would prove to be one of the first academic papers on what would later be known as the AIDS virus.

As she was completing her graduate studies, Benveniste began dating, and then married, Casey Morrow, the doctoral student who had recommended her for the collaboration with Gottlieb. Morrow was a year ahead of her, but determined to do his post-doctoral work at UCLA so that they could stay in the same state.

While she enjoyed the exciting work on the immune-deficient patients, Benveniste had developed an interest in the emerging field of neuro-immunology. The conventional wisdom that there was no interaction between the biological system of the brain, as it was immunologically privileged, and the immune system, was being challenged by diseases like multiple sclerosis (MS), in which immune cells were found in the brains of patients.

Benveniste remained at UCLA for her post-doctoral work in the lab of neuro-immunologist Jean Merrill. In this role, she not only published high-profile papers, but obtained a postdoctoral fellowship from the National Multiple Sclerosis Society. This funding proved critical to the next step in her professional development. Morrow’s post-doctoral work ended, and he began searching for an academic job; although the deep South wasn’t on their radar, he interviewed at UAB due to its strength in virology. Benveniste was shocked when he called her from Birmingham and said, “It’s really nice here.” They were both Californians, and hadn’t conceptualized living in Alabama.

But to Alabama they went. The incoming chair of Neurology at UAB, John Whitaker, was an MS clinician, and was interested in Benveniste’s research, so he hired her after she sought him out – but her position was independent and untenured, and she would be paid through her own fellowship funding. Not only this, but she was the only Ph.D. in a clinically-oriented department, which, she noted wryly, was “not a good thing.”

Shortly after beginning work, networking with other UAB faculty revealed to Benveniste that she had not been strategic in negotiating for her position and salary. She took the lesson to heart, and after some further negotiation, was offered a position as tenure-track faculty in the cell biology department.

It was a crucial move. She discovered interests beyond her passion for scientific discovery when she was given opportunities to mentor, opportunities which expanded when she was asked to be the Program Director for graduate students. She then became the founding associate dean for the office of postdoctoral education, and advocated for postdocs to have increased training opportunities and access to health insurance. In 2000, Benveniste was offered the position of chair of the cell biology department.

Responsibilities as chair grew when, in 2013, the department of cell biology merged with the department of physiology and biophysics to become the department of Cell, Developmental & Integrative Biology, and she became the inaugural chair of this new department. But she enjoyed shepherding faculty through their career trajectories and mentoring younger researchers, as well as expanding the work and reach of the department.

From a sheltered childhood as the daughter of immigrants to one of the pre-eminent women in scientific leadership, Benveniste’s accomplishments have been exceptional. But she hopes that her legacy will be that she gave back, as opposed to her professional accolades. Mentoring and facilitating the growth of younger professionals remains a mission close to her heart.

“My 36th graduate student defended his dissertation two weeks ago,” she said, “and I’ve had 30 wonderful post-docs. The majority have gone on to academic positions and are very successful. I was able to see brand new assistant professors I hired move through the ranks of faculty. It’s incredibly gratifying.”

Benveniste credits her success to an attribute that may be straightforward, but is never easy: “I’m a very hard worker. I have very high standards, and I try to live up to them. If I do something, I’m all in.”