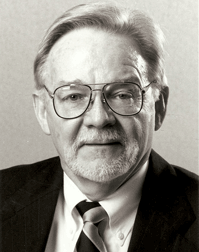 The School of Medicine is celebrating 50 years of science at the 2020 Reunion Symposium in Honor of J. Claude Bennett on Friday, March 20. The symposium will honor the life and legacy of J. Claude Bennett, M.D., who formerly served as president of UAB, director of the Division of Clinical Immunology and Rheumatology, chair of the Department of Microbiology, and chair of the Department of Medicine.

Before his time at UAB, Bennett studied at California Institute of Technology, and was one of the first scientists to propose gene segment rearrangements to address the paradox of the one gene-one protein hypothesis, juxtaposed with the ability of humans to generate antibodies to millions of different antigens. Shortly after, Bennett joined UAB faculty in 1965 as an associate professor in the Department of Medicine. From that point on, he played a large role in growing and advancing the departments of Medicine and Microbiology, and the division of Clinical Immunology and Rheumatology. During his time as director, the division saw a boost in faculty recruitment and retention, as well as substantial growth in research funding. Additionally, several years after he became chair of the Department of Microbiology, the department was rated as top in the country. Bennett was honored with awards from various notable organizations including the John Phillips Memorial Award for Outstanding Work in Clinical Medicine by the American College of Physicians, and he was the first holder of the Howard Holley Chair of Medicine. Bennett served as President of the American College of Rheumatology (then the American Rheumatism Association) from 1981-82, was editor of the American Journal of Medicine, and was the editor-in-chief of Arthritis & Rheumatism. In his final years at UAB, he resided as president from 1993-1996. Dr. Bennett currently serves an advisor to the division director of Clinical Immunology and Rheumatology.

The Department of Microbiology, the Division of Clinical Immunology and Rheumatology, and the Department of Medicine look forward to joining together at the symposium to commend the legacy of Dr. Bennett’s service at UAB. The departments boast many accomplishments, such as being nationally ranked as some of the best in their fields. The Division of Clinical Immunology and Rheumatology takes pride in over 25 consecutive years of being listed as one of the best programs by U.S. News & World Report, and the Department of Microbiology is ranked 19th for NIH funding amongst the top departments in the country.

Register here for the 2020 Reunion Symposium.