Written by Greg Williams
A protein, ferritin, protects kidneys against a damaging after-effect of injury, heart failure or hardened arteries by controlling levels of iron, according to a study published by researchers at the University of Alabama at Birmingham in the Journal of Clinical Investigation. 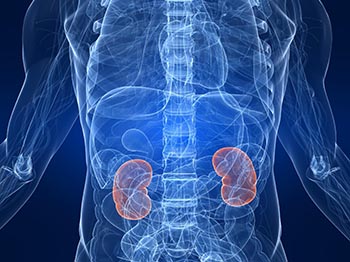 The research team was able to genetically engineer a mouse model that clarified the role of ferritin in iron homeostasis, setting the stage for a new line of research into future treatments that may be able to prevent acute kidney damage caused by iron.

The study results revolve around iron, the most common chemical element on Earth and a core player in the biochemical processes of animals that evolved in its presence. The human body uses iron because its atomic structure can readily accept or donate negatively charged atomic components called electrons, shifting back and forth as needed. Cells, and in particular the powerhouses within cells called mitochondria, pass around electrons and harness charge to drive life processes and make cellular energy with the help of iron.

Unfortunately, that same, useful atomic flexibility means that iron free in the body will react with almost anything it encounters, disrupting charge balances and creating highly reactive free radicals that tear apart delicate structures like DNA, a mechanism by which trauma and many diseases kill tissue.

Thus, iron is almost always bound to transporter and chaperone proteins. When the body suffers a crushing injury, however, iron-containing heme proteins like myoglobin spill out of crushed tissue into the bloodstream, get caught in the blood-filtering nephrons in the kidney and die, releasing their iron. When less oxygen reaches kidney tubules from a failing heart, the lack disables the heme proteins in the kidney cells, causing them to spill the iron they contain and damage tissues.

The current study results confirm a protein called ferritin is among the most important of proteins charged with mopping up free iron. Beyond showing its ability to prevent iron-related cellular damage, UAB researchers and lead co-authors Abolfazl Zarjou, M.D., Ph.D., and Subhashini Bolisetty, Ph.D., say their study is the first to reveal the role of the kidney in the regulation of iron metabolism, a function until now linked to the liver and the intestines.

“Ferritin is a giant globe that sequesters 4,500 iron ions in safe form, thus preventing acute kidney injury,” said Zarjou, who is part of the American Board of Internal Medicine Research Pathway at UAB. “If this mechanism is confirmed, and if we can find ways to manipulate H-ferritin, this work would provide a platform for targeting iron sequestration as a new therapy against acute kidney damage.”

The study’s corresponding author, Anupam Agarwal, M.D., is interim senior vice president for Medicine and dean of the UAB School of Medicine; he directs the National Institutes of Health-funded UAB-University of California San Diego O’Brien Core Center for Acute Kidney Injury Research. Agarwal’s team of researchers has spent years studying whether or not a protein called heme oxygenase-1 might represent the most important part of the system that protects the body from iron-driven free radical production. This protein defense degrades heme to release iron, but it also sends signals to turn up ferritin production. The current study found that this enzyme has no protective value if ferritin is removed from the system, and it may be ferritin – not heme oxygenase-1 – that is the key mediator of protection from iron.

The ferritin shell is made of 24 subunits of heavy and light protein chains, heavy just meaning that one chain is usually large in the pairs in which such chains typically occur. The ferritin heavy chain converts the more unstable form of iron (Fe2+ or the ferrous) to a more stable (Fe3+ or the ferric) form that can be the safely sequestered and deposited within the ferritin shell.

The research team had hypothesized that deletion of ferritin heavy chain in proximal tubules, the workhouse area of nephrons, would result in an increased amount of the free, unstable form of the iron (Fe2+) to exacerbate injury. In addition, any form of kidney injury would ultimately lead to increased cell death and liberation of iron from the intracellular space of necrotic cells in a vicious circle.

“This study represents a leap in the field because we showed that you can knock out ferritin just in the proximal part of the nephron in a living mouse, and when we did so, that it made a huge difference in terms of kidney damage,” said Bolisetty, a post-doctoral scholar in Agarwal’s laboratory. “Past attempts to universally remove ferritin caused the mice to die, and so the role of this protein has remained elusive.”

In recent years, researchers have revealed that system-wide iron metabolism is watched over by certain organs, with most focus to date on the liver and the intestines. The small intestine is the major absorptive organ (where iron enters the body from the diet), and the liver is the main regulator of the processes by which cells turn food into energy (e.g. metabolism) via hormones. Diseases associated with chronic iron overload, including certain types of anemia, and the related deposition of iron, occur in the liver in such clinical disorders.

The kidneys regulate the amount of water and electrolytes in the blood, maintaining the right pH balance for human cells to work and function. A normal kidney contains about a million nephrons, tubes that filter the blood to remove waste products from cellular life, but also to recapture blood sugar (glucose), amino acids and other metabolites and route them back into the blood for re-use. For this reason, the nephrons are closely linked by signaling pathways to those mitochondria in all cells that produce energy. Because of their close ties to metabolism, the cells lining the kidney tubules have lots of mitochondria inside them, so lots of iron-containing heme proteins are concentrated there.

Given its anatomy and intricate function, the proximal tubule segment of the nephron is predictably the most susceptible to various forms of injury. Multiple molecular mechanisms have been proposed that aggravate kidney damage, but free radical-induced kidney injury is recognized as among the most important. Despite the recognition of iron as a culprit in acute kidney injury, little was known going into the current study about the nephron’s ability to cope with increased iron levels and protect it from injury.

The team genetically engineered mice using a molecular technique that cut DNA coding for ferritin out only in cells with markers present in kidney nephrons. Doing so system-wide is fatal, because ferritin has been shown to have many crucial roles in many cell types.  Shutting down the role of the protein only in kidney tubules enabled the team to pinpoint its role there, and in a live mouse for the first time.

Both normal mice and those with ferritin production removed in their kidney nephrons were treated with the chemotherapy agent, Cisplatin. The drug is known to create free radicals that kill tumor cells, but also to make heme groups in mitochondria spill iron into the cells, triggering free radical production that damages the kidneys. Compared to control mice that still had ferritin in their kidney tubules, the ferritin knockout mice saw a 40 percent worsening of kidney function after three days of Cisplatin treatment.

Levels of both of heme oxygenase-1 and ferritin are known to rise in response to the injury caused by Cisplatin, but the current study found that heme oxygenase-1, despite having some protective qualities, could not protect kidney nephrons from oxidative damage when ferritin was absent.