Written by Tyler Greer
The National Institute of Diabetes and Digestive and Kidney Diseases has renewed a grant shared by the University of Alabama at Birmingham School of Medicine and the University of California, San Diego, that will extend and expand research into acute kidney failure, or acute kidney injury, which kills 70 to 80 percent of patients in intensive care units who develop the disease. 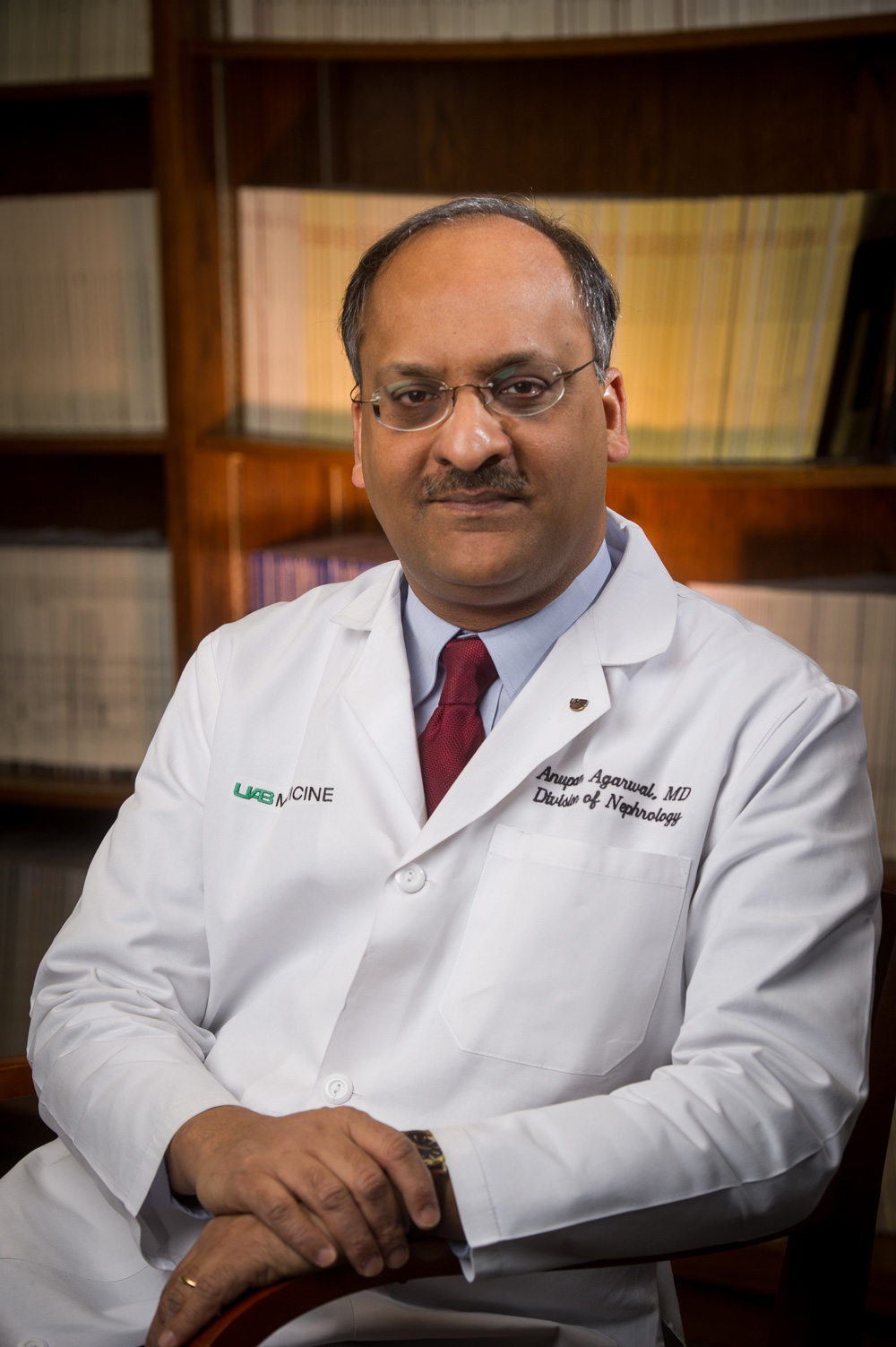 The rate of acute kidney injury has increased in recent years as more patients are older, diabetic, obese and hypertensive, and mortality rates from the disease have not improved in the past 40 years.

Since 2008, Agarwal has lead the O’Brien Center for Acute Kidney Injury Research, one of seven federally funded centers in the country aimed at making state-of-the art technologies and resources readily accessible to researchers pursuing studies in relevant areas related to kidney disease. The center serves as a national core resource to identify and fund promising research and to provide important scientific services to the funded investigators. The five-year, $5.64 million renewal will expand efforts, including work to find genetic determinants for early detection and expand an international registry.

In the center’s first five years, “we have been able to bring together world renowned scientists and brought to bear their expertise on this disease,” said Paul Sanders, M.D., associate director of the center and a professor of medicine in the UAB Division of Nephrology. Their efforts resulted in more than 640 collaborative interactions among researchers and more than 175 peer-reviewed scientific publications. A total of $570,000 was awarded to 15 pilot projects to young investigators, which in turn garnered an additional $7 million in new extramural funding, a 12-to-1 return on investment.

“The O’Brien Center has provided an unprecedented opportunity for UCSD to partner with UAB to create a unique resource for acute kidney injury research,” said Ravindra Metha, M.D., professor of Clinical Medicine at UCSD and associate director of the center. “Combining the resources at both centers has enabled us to develop an international collaborative network of investigators who are addressing several important questions in acute kidney injury. Several ongoing projects leverage the O’Brien infrastructure at both institutions, including an ongoing international registry that is capturing data on the natural history and management of acute kidney injury and a study defining the genetic basis of drug-induced kidney injury. The continued funding will allow us to further enhance the collaborative network and provide additional novel techniques for the functional characterization of acute kidney injury. Ultimately we hope the enhanced awareness and concentrated research in acute kidney injury will lead to major advances to improve outcomes from this devastating disease.”

Kidneys filter toxins from the body and receive 20 percent of the body’s blood supply. Acute kidney injury results from a cascade of events, beginning with a sudden drop in blood supply resulting from an infection, an infusion of contrast agents during an angiogram or major trauma. The kidneys become impaired, toxins accumulate and other organs – the brain, heart, lungs, liver – begin to shut down.

Acute kidney injury affects about 1.2 million hospitalized patients per year, and 300,000 people die annually from the disease – a mortality rate that is more than breast and prostate cancer and heart failure and diabetes combined. Total mortality associated with acute kidney injury ranges from 45 percent in all hospitalizations to more than 80 percent in ICU patients. Acute kidney injury complicates the recovery of 15 to 25 percent of intensive care patients and can double the length of a patient’s hospital stay. Almost 30 percent of patients with acute kidney injury do not recover kidney function completely and contribute to the growing burden of chronic kidney disease. It adds $10-12 billion to the cost of health care annually.

Numerous therapeutic interventions have been evaluated in clinical trials without success. “The patient needs dialysis in most instances by the time tests are run and acute kidney injury is realized,” Agarwal says. “We hope the assembled researchers can find biomarkers that can be used to measure and help with diagnosing the condition before it reaches these levels. We are confident that, working together, we will be able to accelerate the development of novel therapies to prevent and manage acute kidney injury.”

A multi-disciplinary team from UAB and UCSD lead a variety of core resources. A pre-clinical core includes animal modeling and small-animal imaging; a clinical core includes a sample repository linked to a clinical and genomics database of patients; a bioanalytical core performs mitochondrial bioenergetics, oxidative stress analysis and metabolite analysis; and a biostatistics core provides assistance including study design, data management, analysis and preparation of reports.

O’Brien Centers were established in 1987 and named for George M. O’Brien, a member of the U.S. House of Representatives from Illinois from 1973 until his death from prostate cancer in 1986.