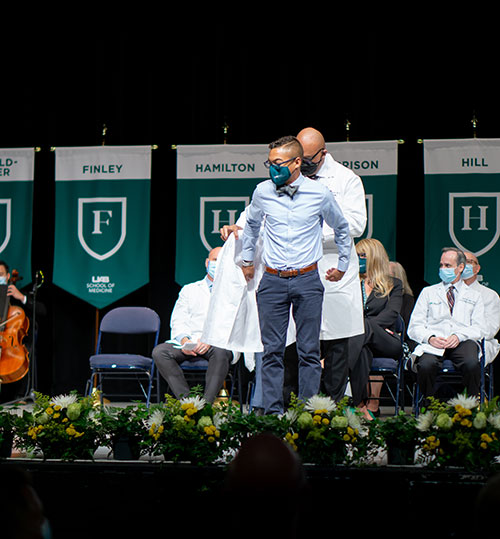 On Sunday, Aug. 15, the UAB School of Medicine welcomed the 2021 entering class at the annual White Coat Ceremony, held at the Birmingham-Jefferson Civic Center Concert Hall. Because of the school’s tightened COVID-19 protocols, masks were required for all attendees and the class was split across two, slightly abbreviated ceremonies, grouped by Learning Community. A ceremony for the Barfield-Carter, Finley, Hamilton, Harrison, and Hill Learning Communities took place at 12 p.m., and one for the Hirschowitz, Kirklin, Lyons, McCallum, Oparil, and Pittman Learning Communities took place at 2:30 p.m.

Created by the Arnold P. Gold Foundation in 1993, the White Coat Ceremony emphasizes the importance of compassionate care for the patient as well as scientific proficiency. At UAB, it marks the end of medical school orientation and the new students’ first class—Patient, Doctor, and Society—which focuses on the role that physicians play in society with emphasis on professionalism, compassion, responsibility, ethics, and the doctor/patient relationship.

Selwyn M. Vickers, M.D., FACS, senior vice president for medicine and dean of the School of Medicine, welcomed the students to the ceremony. He shared that more than 90 percent of the class has received the COVID-19 vaccine, calling it the “first step in being a physician, caring about their patients and others” and “a significant step to understanding the true role of being a physician and a leader.” He then encouraged the students to stand up, find their friends and family in the crowd, and give them a round of applause for providing the support that helped the students reach this pivotal moment, and that will be critical for their future success in medical school.

Vickers was followed by Christina Grabowski, Ph.D., associate dean of Admissions and Enrollment Management. Grabowski told the class, “You are the chosen few,” a compliment that was meant literally, as the class of 186 students had been selected from a pool of more than 5,000 applicants. She shared information about the students’ widely varied undergraduate experiences, talents and hobbies, community service efforts, and more. Among the details she shared were that the students graduated from 51 undergraduate institutions; have recorded 105,435 hours of research activity; are fluent in 26 languages; and play a wide variety of musical instruments, including the guitar, piano, drums, saxophone, bassoon, and ukulele, among others.

Vickers then introduced Medical Alumni Association (MAA) President V. Michael Bivins, M.D. The MAA generously provides white coats for the incoming class each year. Bivins shared his perspective that a career in medicine is a privilege, saying, “Every day when we get up, we put on these white coats and we get to do this. Not we ‘gotta’ do this – we get to do this.” 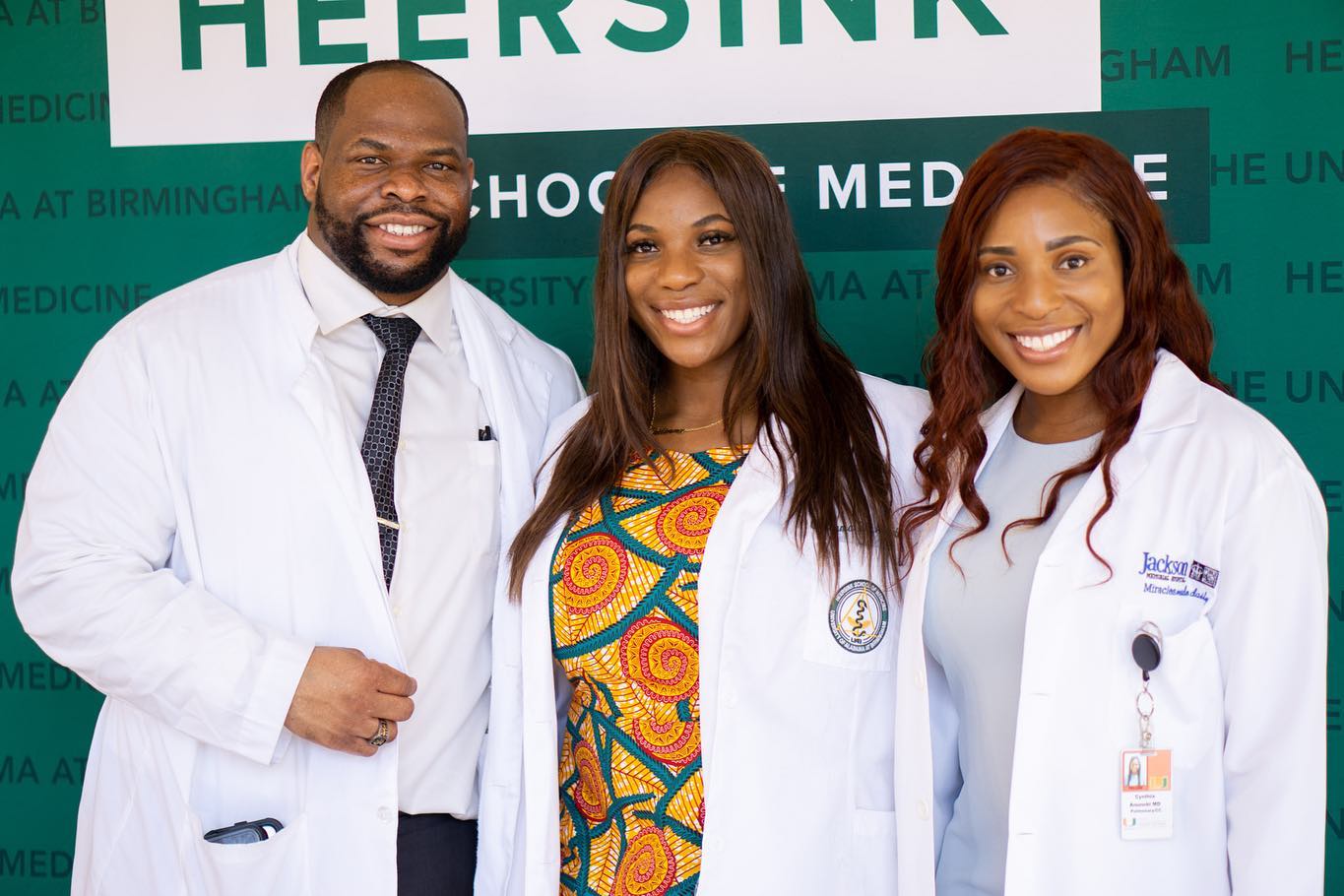 Bivins presented the MAA’s Martha Myers Role Model Award to Pink L. Folmar, Jr., M.D., a 1972 alumnus who also completed his internal medicine residency at UAB, serving as chief resident. Bivins read from a letter nominating Folmar for the award: “The characteristic behaviors Pink has always demonstrated are a high level of clinical competence with care delivered in a patient-centric, warm and caring manner. He is a born teacher, both to his patients and his trainees.”

Hussein Abdul-Latif, M.D., was the event’s keynote speaker. In 2020, the student body selected him as the faculty recipient of the Leonard Tow Humanism in Medicine Award, which recognizes a faculty member and student each year for the value they place on humanism in the delivery of care to patients and their families.

Abdul-Latif spoke about the necessity of wisdom and humanity in medicine: “You will learn in medical school that there are algorithms and pathways that we have to apply to every disease, but you will also learn in medical school that every decision that we make about every patient that we see is an individual decision. It is guided but not mandated by algorithms and pathways, because we have to take the human factor of our patient in our decision-making.”

Several awards were presented at the White Coat Ceremony. MS3 Desalyn Johnson was awarded the 2021 Sara Crews Finley, M.D. Endowed Leadership Scholarship. The scholarship honors the legacy of Sara Crews Finley, M.D., co-founder of the first medical genetics program in the Southeast and a pioneer in the field, as well as a beloved faculty member and student mentor. Established by her family in 2014, the scholarship recognizes students who demonstrate exceptional leadership, service, and academic standing both in and outside of their medical training. It is awarded annually to a rising third-year medical student and provides full tuition for the third year of medical school and is renewable for the fourth year. Including Johnson, there have been seven Finley Scholars in the School of Medicine.

The late Alabama Gov. Albert P. Brewer established the Brewer-Heslin Endowed Award for Professionalism in Medicine in 2015, which is given annually to a faculty physician who upholds the highest ideals of professionalism in medicine. The award is named for both Brewer and Martin Heslin, M.D., a longtime UAB surgeon leader. Heslin once served as Brewer’s surgeon and was the inaugural recipient of the award. This year’s recipient is Sharon Spencer, M.D., professor in the Department of Radiation Oncology, whom Vickers described as “an outstanding radiation oncologist and physician who deeply cares for her patients, who often have incurable cancer.” 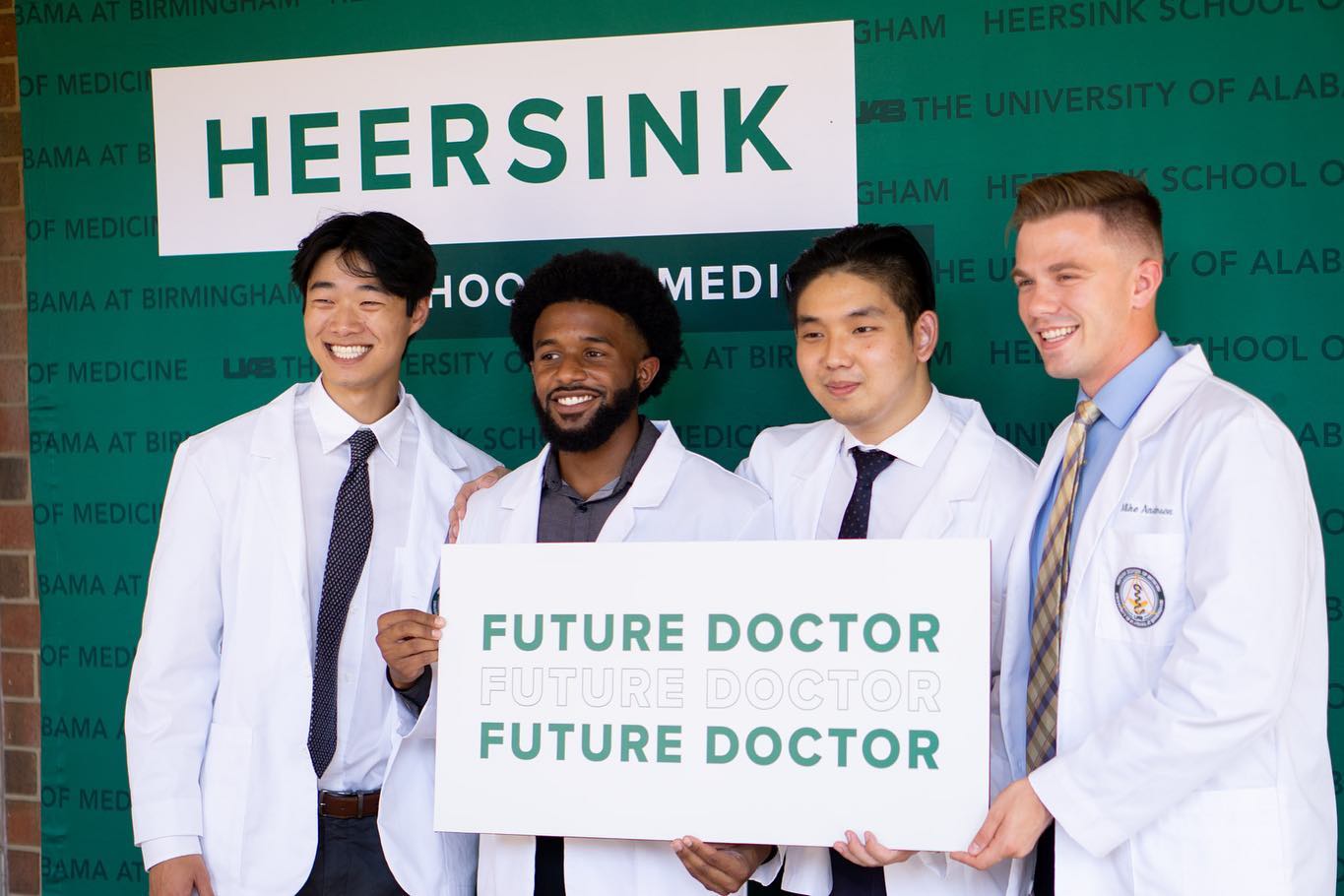 After the awards were announced, the students filed across the stage and were helped into their white coats by representatives of the School of Medicine’s regional campuses in Montgomery, Tuscaloosa, and Huntsville. Certain legacy students were helped into their white coats by their School of Medicine alumni family members. Each student was given a pin signifying humanism in medicine, a gift from the Arnold P. Gold Foundation, and was photographed with Vickers.

After the cloaking, the class stood and was officially presented by Nicholas Van Wagoner, M.D., Ph.D., associate dean for Students, who urged the family and friends in attendance to join the students outside to celebrate this important milestone.

MS1 James Stallworth, of Mobile, said he chose UAB for medical school because “UAB is nationally and globally recognized and because of the direct positive impact that I’ve seen UAB make on Birmingham and all of Alabama.” He said he found the White Coat Ceremony empowering and motivating: “It was very empowering. It recharged my motivation to face the difficult coursework that we’ll have over the next four years. It also made me realize that it is a privilege that I get to one day practice medicine.”

Cody Anger, of Pelham, says he wants to pursue a career in medicine because of “my passion for preventative medicine. I decided to use my personal interest in science to study medicine to make a difference in my local community one day.” He says the White Coat Ceremony gave him a sense of pride and belonging. “The White Coat Ceremony inspired me to always remember it is a privilege to get to serve others in my community. I felt proud to be a part of the UAB medical culture.”