The end of an era: LHRB transforms to new, state-of-the-art space 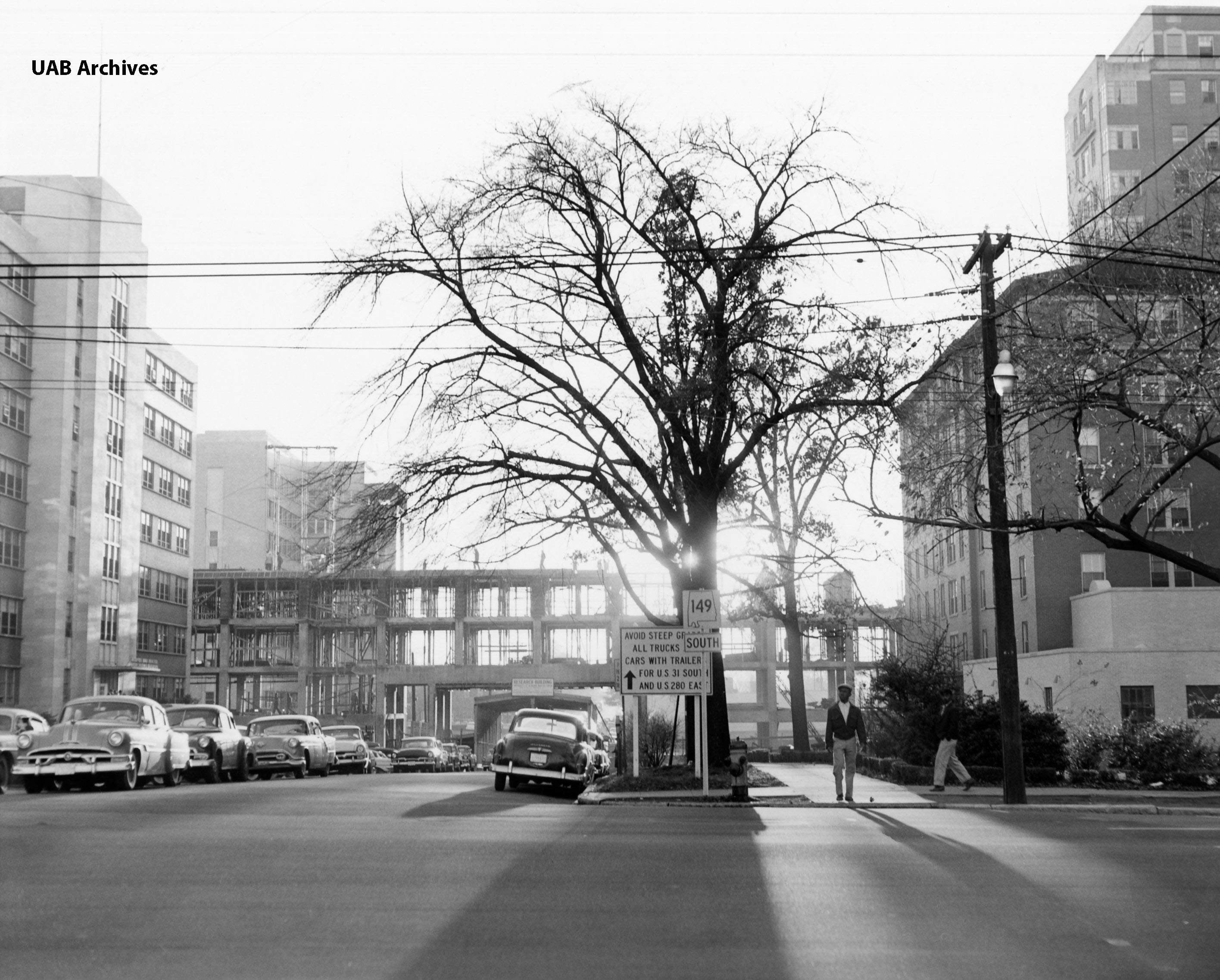 Last year, the University of Alabama Board of Trustees approved plans to renovate and expand the current Lyons Harrison Research Building (LHRB)—plans that will transform it into a modernized and innovative space named the Altec Styslinger Genomic Medicine and Data Sciences Building. To accomplish the new space, plans have required much construction on UAB’s campus, including the demolition of Pittman CAMS (Center for Advanced Medical Studies) and the Roy R. Kracke Clinical Services Building.

In the 1950s, the development of the medical and research building was made possible by a State of Alabama Bond Issue, a matching grant from the National Institutes of Health (NIH), and other medical college funds. The Bond Issue equaled $4.5 million for Medical Center purposes. Of that, $1.03 million was secured to be matched by the NIH for the new research building.

The structure was built by Birmingham architects Van Keuren, Davis and Company. E. Todd Wheeler of Chicago served as a consultant and Richardson Construction Company of Birmingham was the general contractor. The groundbreaking ceremony was in March of 1958. The second and third floors became occupied on Oct. 1, 1959, and the entire building—with a total of 8 floors and a basement with work space—was completed on May 1, 1960. At the time of its completion, it connected with each floor of the Medical Dental Building, and connected with all but the first floor of University Hospital via ramps. It also connected with all but the first and second floors of the nurse’s residence.

On Nov. 9, 1966, the Health Sciences Research Building was rededicated in a day-long ceremony as the Lyons Harrison Research Building. The morning sessions were devoted to scientific lectures. In the afternoon, dedication ceremonies commenced, which included speeches from president of University of Alabama Dr. Frank Rose, Dr. Joseph F. Volker, and Senator Lister Hill.

The building was renamed after Champ Lyons, M.D., and Tinsley Harrison, M.D., who were admired across UAB’s campus.

Champ Lyons, M.D., was professor and chair of the Department of Surgery from 1950-1965. He was born in 1907 in Lancaster, Pennsylvania. He received his bachelor’s degree at the University of Alabama. Then, he entered Harvard Medical School where he received his M.D. degree in 1931. He completed his internship and residency training at the Massachusetts General Hospital. After World War II, he served on the faculty at Tulane University and remained there until 1950 when he was appointed as chair of the Department of Surgery at UAB. Dr. Lyons’ major contributions were in the areas of surgical infections and vascular surgery. Read about the Champ Lyons Lectureship in General Surgery.

Born in Talladega, Alabama in 1900, Tinsley R. Harrison, M.D., was recruited to become chair of the UAB Department of Medicine, where he served from 1950-1957. He was a sixth-generation physician who wrote the first five editions of Harrison's Principles of Internal Medicine. After completing medical school at Johns Hopkins and completing trainings at Peter Bent Brigham Hospital in Boston, Johns Hopkins, and Vanderbilt University, he returned to Birmingham to teach medicine and serve as dean and chair of the Department of Medicine. Read more about his contributions to UAB. 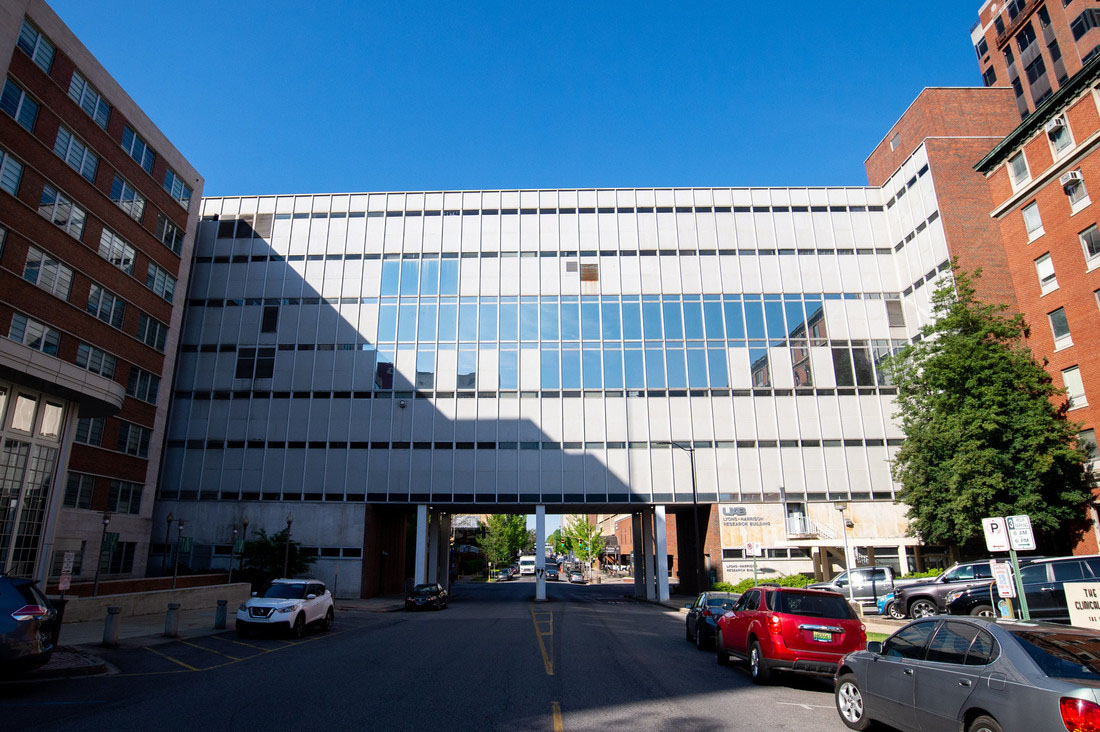 Both Lyons and Harrison made incredible marks on the medical school, UAB, and Birmingham.

In a lecture from 1965 titled “The Lengthened Shadow,” Volker paid a spoken tribute to Lyons and Harrison. He said: “Doctors Harrison and Lyons, when you returned to Alabama each of you brought a superb mind, exceptional professional skill, and a dedication to all things encompassed in this University’s aspirations. All of us—colleagues, students, patients, and friends—are wealthier by far because of your efforts. In the largest context the greatest wealth is the extraordinary sense of values you have given us as individuals and as an institution.”

Lyons Harrison: A home to science and discovery

LHRB has been the home of countless scientific discoveries yielding new therapies since its initiation. By the numbers, it has been home to millions of dollars in NIH funding, numerous hours of research studies, and multiple investigators’ office space for 61 years.

“My dad had a few different offices in LHRB during his nearly 34 year career at UAB. Growing up it was always so exciting to visit him at work, especially because he used to keep root beer and tomato juice in a little mini fridge and always had candy. Never would I have imagined as a kid that I would one day work in this building too! It’s been a privilege to be in this space, and I look forward to seeing the outcome of the renovations.” –Rhiannon Deierhoi Reed, MPH, DrPH, assistant professor in the Division of Transplantation

“I started my UAB career in the LHRB basement 18 years ago. I thought I would retire from the basement. It’s a bittersweet feeling now that we are actually going to move out. I am looking forward to the new lab with WINDOWS, but good memories in the LH basement stay forever!” -Pathology Core Lab Manager Dezhi Wang, M.D.

The completion of the Altec Styslinger Genomic Medicine and Data Sciences Building will allow for the recruitment of new principal investigators specializing in genomics and precision medicine, as well as new research and health care jobs. Additionally, the new space will generate more funding from the NIH and other private and public partners. It will house the Hugh Kaul Precision Medicine Institute and the Informatics Institute, along with many of their investigators.