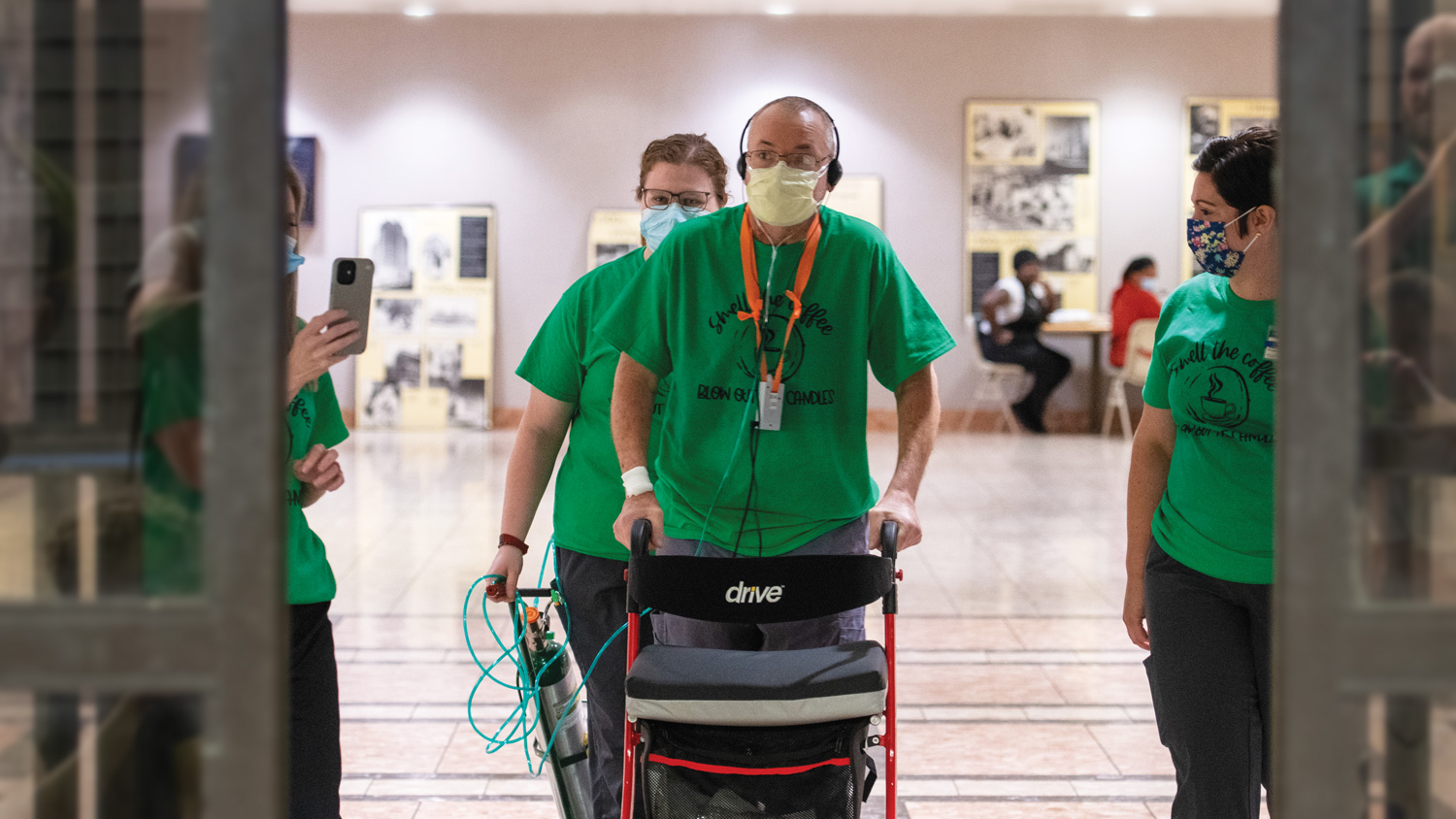 Ricky Hamm is no stranger to UAB Hospital. As a medevac helicopter pilot, he has flown ill and injured patients to UAB for 17 years. He was the first medevac pilot to touch down on the landing pad of UAB’s new North Pavilion when it opened in 2004.

On January 10, 2021, he found himself at the North Pavilion again, but this time as a patient. A COVID19 patient. And, it would be 187 days before he would go home.
Hamm said he is not sure how he contracted coronavirus. “We live in a rural area, and I always wore a mask and kept my distance when going to town,” Hamm says. “A bunch of us went to get the first dose of the Moderna vaccine, but I must have already had the virus.”

Hamm, a veteran who first flew medevac in the army, began to feel sick January 5. Five days later, he was in UAB Hospital with severe breathing issues. He was not a good candidate for a ventilator, so his physicians had to turn to extracorporeal membrane oxygenation, also called ECMO.

ECMO is a device that removes a patient’s blood, filtering out the carbon dioxide and adding oxygen. Blood is then pumped back into the body. In effect, the machine takes over the roles of both heart and lungs.

“ECMO is a complicated, complex procedure,” says Keith Wille, M.D., professor in the Division of Pulmonary and Critical Care Medicine and medical director of the adult ECMO program. “It’s invasive and not much fun for the patient. In this case, it saved his life. But trust me; you do not want to go on ECMO.”

Hamm was on ECMO for 147 days, a remarkably long time. He now carries the dubious distinction of being UAB’s longest tenured COVID19 patient at 187 days. Now that he is home, he still uses supplemental oxygen and an extra-strength CPAP machine at night to help his breathing. He has suffered profound hearing loss, which his wife, Shannon, a speech pathologist, hopes may resolve over time.

His bout with COVID19 was severe. “He had a lot of support from family and friends,” says Shannon Hamm. “We were not sure how it was going to go at first. He was basically out of it for about four months. Once he woke up and joined the fight, things got a lot better. Then we knew he was going to make it.”

On July 16, Hamm’s family, friends, and coworkers celebrated his discharge from UAB, complete with a blue light escort from Jefferson County and other area sheriff’s departments.
Hamm, speaking to members of the media outside the hospital, offered his support for vaccination. “I believe in the vaccine,” he says. “I believe I already had the virus before I got the vaccine, before it could work to protect me. I wouldn’t want anyone to go through what I went through.”

Hamm’s wife, Shannon, says they were halfway through construction of a new house when Hamm got sick. The contractors have now finished, and Hamm got his first look at the house as the caravan bringing him home from the hospital pulled up.

“We built it to live in the rest of our lives,” he says. “Built ramps and wide doorways. No stairs. It was for when we grew old. I never expected to need handicap access quite this soon.”
Hamm did not celebrate his birthday extravagantly in 2020 due to the pandemic. After more than seven months, he came home from the hospital the day before his 51st birthday—the perfect time for a celebration. – Bob Shepard