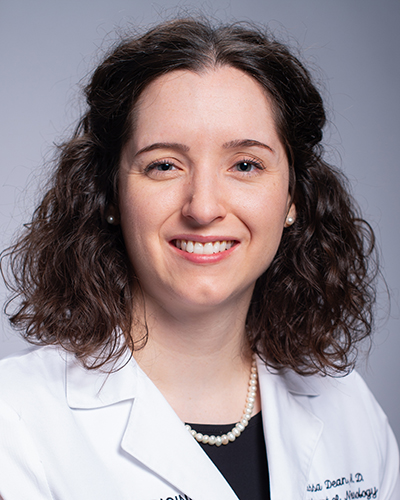 Marissa Dean, M.D., assistant professor in the Department of Neurology, has been awarded the Dean’s Excellence Award in Teaching for junior faculty.

She is a neurologist in the Department of Neurology that specializes in movement disorders such as Parkinson’s disease, Huntington’s disease, and Dystonia. She places strong value in academia and continued education and serves as an avid instructor and mentor to various medical students, residents, fellows, and faculty across the UAB campus.

Dean achieved her Bachelor of Science from the University of Michigan in 2008. She went on to receive her medical doctorate from Wayne State University School of Medicine in 2012, where she also completed her residency. In 2016, Dean joined the UAB Department of Neurology as a movement disorders fellow and was soon hired on as an instructor. Now, as a faculty member in the Department of Neurology, Dean serves as the director of education for the movement disorders division, the course director for the movement disorders neurology resident lecture series, and she is the co-director of the Huntington’s Disease Clinic.

Dean’s passion for education is evident throughout her time in academia. From as early as medical school, she took on leadership roles including the Residency Educational/Conference Officer. Her responsibilities included creating and organizing the Neurology Residency Program Lecture Series and eventually re-structuring the lecture organization and content, adding a Neurology Ethics Lecture Series. She was also actively engaged in teaching other medical students and residents during her inpatient and neurointensive care unit rotations during residency. As a fellow at UAB, Dean continued providing lectures and creating other academic opportunities for movement disorder colleagues like the weekly movement disorders didactic series.

David Standaert, M.D., professor and chair of the UAB Department of Neurology, says, “She is an outstanding clinician, with both strong diagnostic skills and the ability to effectively communicate with her patients. She has an ability to not only identify areas for improvement but create workable solutions for those issues.”

Dean has been the guest lecturer at several local and national events and conferences, including the Michael J. Fox Foundation, featuring her work in Parkinson’s disease and Huntington’s disease and she participates in several clinical research projects as a sub-investigator.