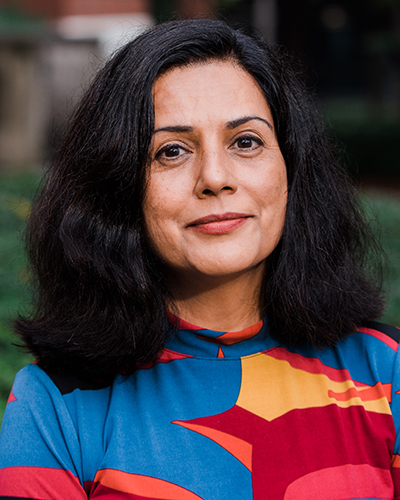 Nita Limdi, Pharm.D., Ph.D., Professor in the Department of Neurology has been awarded the Dean’s Excellence Award in Research.

She is an incredibly ambitious, creative, and successful scientist focused on a field that is critically important for the future: pharmacogenomics, the science of understanding how genes predict response and adverse effects of medications, which she has made great strides to bring out of the lab and into the clinic here at UAB.

Limdi began her advanced academic career in India at the A.R. Patel College of Pharmacy and completed her bachelor’s of science degree from the University of Alabama at Birmingham (UAB) in 1993. She then achieved her doctorate in Pharmacy from Samford University in 1994, a masters in public health from UAB in 2005, and finally her Ph.D. in epidemiology from UAB in 2008. While completing her education, Limdi worked as a hospital pharmacist and an adjunct research professor in neurology and epidemiology at UAB and steadily climbed the ranks until reaching full professorship in the department of neurology in 2014.

Limdi currently has appointments in the department of neurology, nephrology, clinical pharmacology and toxicology, and epidemiology. With her impressive background spanning many disciplines, she has earned her position of director of the program for translational pharmacogenomics. Limdi is an established investigator with both human subjects and observational studies that work to identify the drug efficacy and safety in use.

Her research focuses on the joining of pharmacology, the study of drug action with genetics, and the study of gene function to provide precision medicine with a drug prescription, specifically in anticoagulant and antiplatelet response. Limdi studies the role that genetics plays in the treatment of heart disease. She, along with other colleagues in the field, has discovered that over 30 percent of people diagnosed with heart disease have a variant in their DNA that decreases the effectiveness of the most commonly prescribed drug for this diagnosis, leading clinicians to turn to other methods or prescriptions to manage those patient’s care.

While research is her primary role, Limdi oversees the discovery and clinical implementation of pharmacogenomics across the entire UAB medical system. Through this initiative, her team has identified and overcome barriers, incorporated genotype-guided therapy, and assessed clinically relevant outcomes to conduct economic analysis and inform health policy and reimbursement strategies for pharmacogenomics.

David Standaert, M.D., Professor and Chair of the UAB Department of Neurology, describes her research career as one of “spectacular growth.” She has assembled the largest prospective clinical cohort (more than 1,500 subjects) for the study of the complications of anticoagulation. “The field (pharmacogenetics) did not really exist when she entered it,” says Standaert, “indeed, it was an act of considerable bravery to venture down what was essentially an unexplored trail.”