Written by Tyler Greer
Becker’s Hospital Review has named University of Alabama at Birmingham Hospital one of its “100 Hospitals With Great Women’s Health Programs” for 2013. 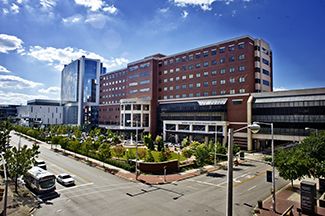 Becker’s Hospital Review recognizes hospitals with exceptional programs dedicated to the health and well-being of women. UAB Hospital’s Women and Infants Center is the only hospital in Alabama where maternal-fetal medicine physicians are available in-house 24 hours a day, 365 days a year. The world-class facility is dedicated to the care of women and infants and can provide inpatient surgical care or routine outpatient office visits, all under one roof in a comfortable, family-friendly atmosphere.

“Our Women and Infants Center boasts one of the largest Maternal-Fetal Medicine Programs in the country, is one of only 14 centers nationwide that participate in the Maternal-Fetal Medicine Units Network, and is the only center in Alabama to participate in this prestigious network,” said William Andrews, Ph.D., M.D., professor and chairman of UAB’s Department of Obstetrics and Gynecology. “Our people — physicians, nurses and support staff — continue to build upon the excellence for which UAB is known by providing great comprehensive obstetrics and gynecology care for our patients and their families.

“We are honored to be recognized for our efforts and will continue to strive for excellence in care for the women of Alabama.”

The editorial team at Becker’s Hospital Review included hospitals on its list based on the comprehensiveness of their women’s health programs and the quality of care they offer. Hospitals included on the list have been recognized for women’s health by several organizations, including U.S. News & World Report, Healthgrades, UNICEF’s Baby-Friendly Hospital Initiative, and CareChex.

UAB Hospital is the only hospital in central and north Alabama to participate in Best Fed Beginnings. Also, together with Children’s Hospital of Alabama, UAB’s Regional NICU is Alabama’s only Level IV Unit, and the connecting sky bridge between the two entities provides a seamless transition for babies who require advanced inpatient care at both locations. UAB neonatologists are available in-house 24 hours a day, 365 days a year.

UAB’s nursing care was granted recognition as a Magnet hospital for the third year, in 2011, by the American Nurses Credentialing Center. The Women and Infants Center was recognized by Birmingham Parent and Alabama Baby magazines as the Best Hospital NICU in Birmingham for the third year in a row in 2013. UAB Hospital received the 2013 Women’s Choice Award for America’s Best Hospitals in Obstetrics for the second year in a row. In addition to those honors, UAB Urogynecology Care and Continence Clinics received the nation’s first National Association for Continence Center of Excellence designation for the care of patients with incontinence and prolapse in 2013.

Learn more about these services and others at uabmedicine.org/women.