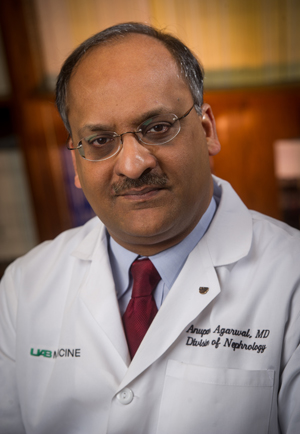 Anupam Agarwal, M.D., a noted physician, scientist and academic leader, has been named interim senior vice president of Medicine and dean of the School of Medicine at the University of Alabama at Birmingham.

Agarwal is the Marie S. Ingalls Endowed Chair in Nephrology Leadership and director of the Division of Nephrology. He is also vice chair for Research in the Department of Medicine and served as interim chair of Medicine from August 2011 until August 2012.

“Anupam is an outstanding leader. He has the respect and admiration of his colleagues and he is a stalwart advocate for UAB. He was an obvious choice to be the interim senior vice president and dean,” said Watts, who served in those roles from October 2010 until his appointment as president. “With Anupam, the School of Medicine will not stand still; it will continue to gain momentum toward our strategic goals.”

“It is an honor to be named interim dean of the UAB School of Medicine,” Agarwal said. “Dr. Watts has laid a clear and progressive path toward even greater success for the School, and we will keep moving forward along that path.”

Agarwal said he will not be a candidate for the permanent dean position, but looks forward to working with the selectee on a smooth and seamless transition. Seth Landefeld, M.D., chair of the Department of Medicine, will name an interim director for Nephrology while Agarwal serves as dean.

Agarwal joined UAB as an associate professor in 2003 and was promoted to professor in 2005. He was appointed division director for Nephrology in 2008 and vice chair for Research for the Department of Medicine in 2009. He was appointed to the Marie S. Ingalls Endowed Chair in Nephrology Leadership in April 2011. Agarwal’s clinical and basic science interests center around acute kidney failure. He also is director of the NIH funded UAB-University of California San Diego O’Brien Core Center for Acute Kidney Injury Research. He is an elected member of the American Society for Clinical Investigation and recipient of multiple awards including the 2012 Dean’s award for excellence in leadership and the 2013 Graduate Dean’s award for excellence in mentorship.