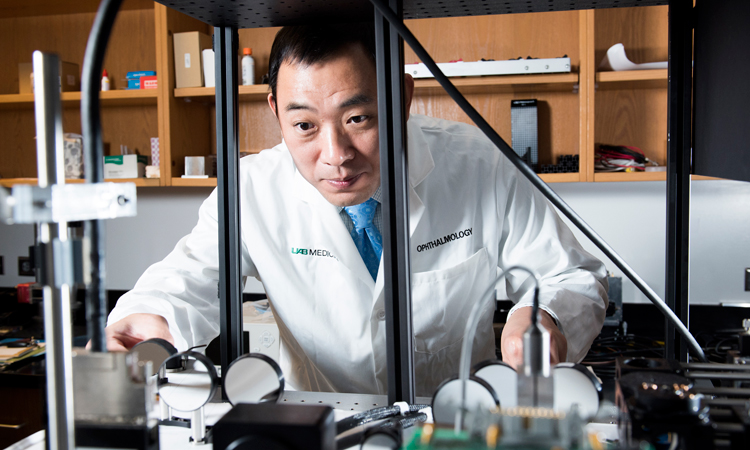 Yuhua Zhang, Ph.D., assistant professor of ophthalmology, works with an instrument that can image the retina at the cellular level in three dimensions and may help clinicians better understand diseases that cause age-related macular degeneration. (AMD) causes central vision loss in millions of Americans, interfering with everyday tasks such as driving, reading, and recognizing faces.

The disease is most common among those ages 50 and older. Scientists are still studying what causes a healthy eye to develop AMD and how the disease progresses to cause vision loss.

Although treatment is available, it cannot begin until the later stages of the disease, when vision problems have already started. So UAB Medicine is focusing on understanding the earliest stages of AMD, hopeful that it will lead to the next generation of treatments and, ideally, a way to prevent it.

Through the Alabama Study on Early Age-Related Macular Degeneration (ALSTAR), UAB researchers seek to identify the specific characteristics that make some more prone to AMD. More than 600 older Alabamians have been enrolled in the three-year clinical study, which tracks eye health and potential AMD risk factors such as diet, smoking, and levels of blood proteins and lipids. The research team hopes that an analysis of the data collected during ALSTAR will point to certain risk factors that can be targeted with preventive medicine.

“By identifying risk factors for early-stage AMD we can start treating this disease as we would other chronic health disorders,” says Cynthia Owsley, Ph.D., MSPH, the Nathan E. Miles Endowed Chair in Clinical Research in the Department of Ophthalmology and lead investigator in the ALSTAR study. “We all know that smoking is a risk factor for lung cancer, and therefore smoking cessation and smoking prevention programs can be very helpful in reducing cancer rates. Similarly, we want to identify the major risk factors for early AMD so that we can help patients at the earliest stages, before vision loss begins.”

The difficulty in measuring the initial progression of the disease is a major obstacle to developing AMD treatments. Traditional vision tests such as eye charts are of little use, since the loss of eyesight normally doesn’t begin until the later stages of AMD. This poses problems for new treatments because there isn’t a way to gauge a new drug’s effectiveness during clinical trials.

Collaborative work between Owsley and renowned AMD scientist Christine A. Curcio, professor and Eminent Scholar in Retina, indicated that testing night vision was effective in evaluating the progression of early AMD. Through microscopic studies of donor eye tissues, Curcio discovered that photoreceptors used for night vision are the first to be impacted by AMD. This led to an evaluation called the dark adaptation test, which isolates night vision, as well as a new FDA-approved diagnostic instrument, which is commercially available and used to administer the test.

Through the ALSTAR study, Owsley and Curcio also are formulating measurable and defined goals associated with AMD treatment, known as endpoints, which could help expedite future clinical trials.

“Many groups are developing new treatments for AMD,” Owsley says. “But before a new drug can come to market, it has to be proven effective in clinical trials. Right now it would be difficult to prove AMD drugs were working during the early stages of the disease because there is a lack of endpoint measures.”

In addition, a new generation of noninvasive clinical imaging technology promises to allow scientists to identify even earlier stages of AMD at the cellular level. Known as adaptive optics assisted imaging, this technology enables Yuhua Zhang, Ph.D., assistant professor of Ophthalmology, to create extremely high-resolution images of photoreceptors in a living retina. By using this imaging on dozens of patients with all stages of AMD and on healthy eyes, Zhang is generating data that are crucial to detecting and monitoring AMD.

“With this information we can show early damage due to the disease as well as assess the rescue of the cells created by new treatments in clinical trials,” Zhang says. “One day physicians may be able to use adaptive optics imaging to detect the earliest stages of AMD and help stop the disease before it severely impacts vision.”