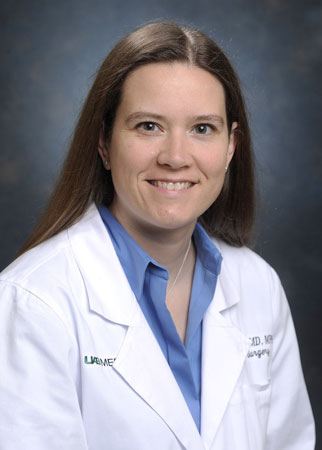 Jayme Locke, M.D.HIV infection became a chronic disease after the introduction of highly active antiretroviral therapy in the mid-1990s. As a result, the leading cause of death among people with HIV today is chronic diseases.

One of these is end stage renal disease, and kidney transplants to HIV+ patients have become an acceptable treatment. Today Jayme Locke, M.D., MPH, assistant professor of surgery in the University of Alabama at Birmingham Comprehensive Transplant Institute, and her colleagues report the first national study of five- and 10-year outcomes for HIV-infected recipients of kidney transplants.

First, the five- and 10-year graft survivals of those HIV+ transplant recipients who were only mono-infected with HIV (without a co-infection with hepatitis C virus, or HCV) was similar to matched comparison patients who were not infected with HIV or HCV (HIV–/HCV–). This validates the use of kidney transplants to treat end-stage renal disease in mono-infected HIV+ patients.

However, the HIV+ patients who were also co-infected with hepatitis C virus had a significantly lower five- and 10-year graft survival as compared with the HIV–/HCV– recipient group. Similar findings were seen for patient survival — the HIV+/HCV– and HIV–/HCV– groups had similar five- and 10-year survival, while the HIV+/HCV+ patient survival was significantly lower.

“These results are encouraging, but do suggest caution in transplanting HIV+ recipients co-infected with HCV,” Locke and colleagues from UAB and Johns Hopkins University write in the paper, which will appear in an upcoming issue of the Journal of the American Society of Nephrology.

One challenge for transplantation is a greater burden of hepatitis C infections in HIV+ patients (more than 24 percent) compared with HIV– patients (5.5 percent). Until recently, there has been no effective treatment for HCV infection.

Increased understanding of kidney transplant survival in HIV+ patients is a special concern at UAB because the HIV epidemic in the United States has shifted to the Deep South; in these Southeastern states, heterosexual black women are one of the fastest-growing HIV populations, Locke says.

Another crucial area of research will be the use of kidneys from HIV+ donors. So far, the U.S. transplants to HIV+ patients have all come from HIV– donors; but South African surgeon Elmi Muller in 2008 pioneered the first kidney transplant between HIV+ donors and recipients, and she has recently reported three- and five-year outcomes for 27 such recipients.

In 2013 the U.S. Congress passed the HIV Organ Policy Equity (HOPE) Act to permit transplants between HIV+ donors and recipients, an organ donation that had been prohibited by federal law. UAB will be participating in the research protocol looking at HIV+-to-HIV+transplants (liver and kidney only).

“If we can pursue HIV+ donors, that would be an extra 500 kidneys a year,” Locke said. “That would cover almost all of the HIV patients.”

Click to enlargePresently there are about 80 kidney transplants a year for HIV+ recipients in the United States, a more than 10-fold increase from a decade ago.

An editorial titled “Kidney Transplantation in HIV-Infected Recipients: Encouraging Outcomes, but Registry Data Are No Longer Enough” is online.