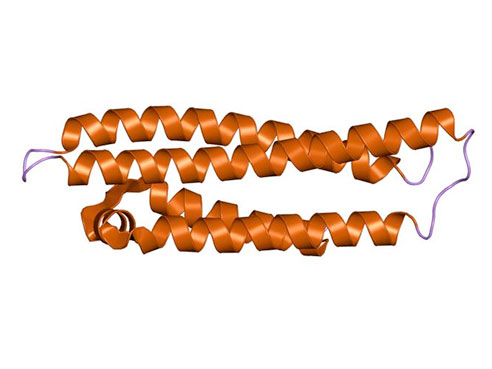 LipimetiX, based in Tempe, Arizona, has supported UAB research by G.M. Anantharamaiah, Ph.D., a professor in the UAB School of Medicine’s Division of Gerontology, Geriatric and Palliative Care, to identify novel analogs of AEM-28 that have greater efficacy than the parent peptide. The new Apo E mimetic peptide, AEM-28-14, showed a 400 percent greater cholesterol-lowering efficacy and a several-fold increase in drug tolerability. Increased efficacy and tolerance have the potential to increase the safe and effective dose range compared with other AEM-28 analogs. Anantharamaiah’s research at UAB focuses on the use of apolipoprotein mimetic peptides to treat atherosclerosis and cardiovascular disease.

“We believe that the profound cholesterol-lowering effect of a single injection of AEM-28-14, accompanied by the enhanced toleration, will allow us to expand upon the statistically significant VLDL cholesterol and triglyceride reductions seen in our recently completed AEM-28 human clinical studies,” said Dennis Goldberg, Ph.D., president of LipimetiX. “Subject to funding, LipimetiX plans to begin development of AEM-28-14 for cholesterol and triglyceride reduction in patients refractory to available therapeutic modalities.”

AEM stands for chimeric Apolipoprotein E Mimetic peptides. UAB researchers created these small peptides to mimic the function of apolipoprotein E (Apo E), a class of protein essential for metabolism of cholesterol and triglycerides. After a meal, Apo E targets cholesterol- and triglyceride-rich lipoproteins to specific receptors in the liver, decreasing the levels in the blood. Elevated plasma cholesterol and triglycerides are independent risk factors for atherosclerosis, the major cause of cardiovascular, peripheral artery and cerebral artery disease. These diseases can lead to heart attacks, loss of limbs and strokes. Faulty lipid metabolism also contributes to adult onset diabetes, and diabetics are very vulnerable to atherosclerosis and to heart and peripheral artery diseases.

UAB scientists patented the first chimeric Apo E mimetic peptide in 1999, reducing the 299-amino acid native Apo E to a 28-amino acid peptide that has two parts. One part of the peptide attaches to the surface of lipoproteins; the other domain binds to Apo E receptors in the liver.

The UAB Institute for Innovation and Entrepreneurship was formed in 2013 to expand the mission and scope of UAB Research Foundation and serve as the nexus for UAB innovation, entrepreneurial educational models, applied research, management of intellectual property and an entry point for industries seeking to partner with UAB investigators. The UAB Institute for Innovation and Entrepreneurship is focused on advancing a strong innovative and entrepreneurial ecosystem at UAB, and has worked to foster the collaboration between Anantharamaiah’s lab and LipimetiX/Capstone to advance treatments developed at UAB to the clinic.