The truth about vaccines: They are safe, and they save lives

Written by Tyler Greer
Editor’s note: David Kimberlin, M.D., is the vice chair of Pediatrics, co-director of the Division of Pediatric Infectious Diseases at UAB and a physician at Children’s of Alabama. He is the editor of the American Academy of Pediatrics’ Red Book, which establishes which vaccines should be given, when and to whom. He is also the father of three children. 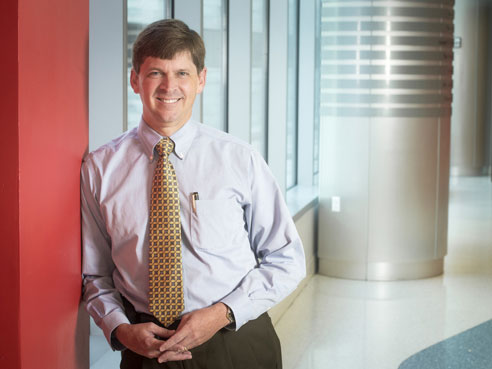 is an absolute jewel for the state. Inside its walls, more than 200 pediatric specialists from the University of Alabama at Birmingham’s Departments of Pediatrics and Surgery work side by side with Children’s of Alabama nurses, technicians and staff. Children from all over our state, and indeed the Southeast region and nation, come here when they are most sick. It is a place parents pray they won’t ever see the inside of, but when they need it they are filled with gratitude for the lifesaving services that it provides.

If you walked through the halls of Children’s of Alabama, or any similar pediatric hospital across the country, just 10 years ago, children with severe dehydration due to rotavirus would have stared at you through sunken eyes. Twenty or 30 years ago, you would have seen children struggling to breathe or on ventilators with the classic rash of measles or chickenpox as the telltale sign of what was causing their lungs to fail. Or you would have seen babies with their arms and legs jerking uncontrollably from the seizures in their brains due to meningitis caused by bacteria such as Haemophilus, pneumococcus, or meningococcus. Thirty years before that, you would have seen children in iron lungs because polio had destroyed the nerve connections in their spines and they could no longer breathe on their own; the lucky ones survived only to go home in a wheelchair because their legs were paralyzed. If you had visited the nursery 40 years ago, you would have seen babies with cloudy eyes, tiny heads, distended bellies, and skin that looked like a blueberry muffin – all because their mothers contracted German measles, or rubella, during the pregnancy.

We don’t see these things anymore. Alabama’s children, like those from across the country, are protected from these ravages because of the safe and effective vaccines they receive during childhood. When our grandparents and great-grandparents were children, about one in five babies born died before 5 years of age, mostly from infectious diseases. The medical miracles that are vaccines protect our children from such horrific fates. But there is one catch with all of this: For vaccines to work, they have to be used — and used by large enough numbers of parents to prevent the vaccine-preventable diseases from gaining a foothold in a community and starting an epidemic. The vast majority of parents understand this and trust their pediatrician when she recommends that all the childhood vaccines be given on time. But a small number of parents hesitate, leaving their own children at risk and putting other children in danger as well. These parents love their children; there is no doubt about that. But they get sidetracked by false claims that question the safety of vaccines.

Toward that end, a disservice was done to the American public by several candidates in the Republican presidential debate on Sept. 16. One candidate parroted outlandish claims about vaccine safety. The truth is this: Vaccines do not cause autism. Period. The science is crystal clear on this.

Other inaccurate claims from the debaters focused on the schedule by which vaccines are recommended for children. Young children’s immune systems are designed to be able to handle not only the number of vaccines that we give early in life, but actually much more. For example, during the common cold, an infant is exposed to approximately 30,000 viral proteins, or antigens, over two to three days. Over the first 18 years of life, a total of approximately 150 vaccine antigens are given to fully protect against all vaccine-preventable diseases. Babies get colds all the time and never have any problems. Giving 150 antigens over 18 years is a breeze compared with what we humans can handle! When presidential candidates (or anyone else) suggest that vaccines should be given but just on a slower schedule, they only risk children coming down with a life-threatening illness during the window of time between when the vaccine should have been given and when it was given. It would be like leaving your home for a 10-mile drive and not buckling your child into the car seat, then pulling over 5 miles into the trip and doing so — all that has been accomplished is putting the child at risk of dying in a car accident for the first 5 miles.

Our world is more interconnected now than it ever has been. All vaccine-preventable diseases are at most 18 hours away by plane. A person from a part of the world that has not brought these diseases under control could be connecting in Atlanta’s airport right now, bound for Birmingham or any other town in Alabama. They could be carrying the virus or bacterium that could infect your child and ultimately result in our meeting in the intensive care unit at Children’s of Alabama. But if your baby has had all of his shots, he will be protected and we will never meet. That would be a good thing.