Written by Tyler Greer
When you are a survivor of the Great Depression and a recipient of three Purple Hearts from your service in World War II, your fortitude in times of adversity is rarely — if ever — questioned.

So maybe it is not a surprise that, when Wade Gladden came to the University of Alabama at Birmingham Heart and Vascular Clinic earlier this year with less than 20 percent heart function and an outlook that was at best unknown, he was actually going to be just fine.

UAB interventional cardiologist Mark Sasse, M.D., put a long-term plan in place to help restore function to Gladden’s then-failing heart. It included a catheterization to check for blockages in his arteries, a balloon valvuloplasty to open a blocked heart valve and enable blood to better flow through the chambers of the heart, the removal of an old pacemaker and implanting a new one, and a transcatheter aortic valve replacement procedure — all to take place over the course of three to four months.

“The plan from the beginning was quite complex when you know that Mr. Gladden is 90-plus years old, his heart was weakened, he had aortic valve disease and a pacemaker that may have been pacing too much — and he needed all of these procedures just to get to the point of feeling good,” Sasse said. “That’s a lot of procedures for someone in his age group.”

Gladden, however, says he was all for it.

“I knew that there were risks, but I really didn’t have any worry about it,” said Gladden, who is among those recognized in The National Purple Heart Hall of Honor. “I trusted the doctor and decided that his plan was the only way to go. He convinced me it was the right way to go.”

And Sasse, too, was convinced the plan had a great chance to work because of Gladden’s history. Sasse also has an appointment at the Birmingham VA Medical Center, and if anyone could endure those procedures and survive at 94 years of age, he says it would be a veteran.

“We always say, if there is anyone who could survive all of these things, it’s a vet, and especially someone like Mr. Gladden, with three Purple Hearts,” Sasse said. “We knew that it was very, very likely he would make it through because of his strong will. If he could survive World War II, three times being wounded, he would be one who would survive three of these major procedures, and get through it properly, and do it happily at each stage of the game.” 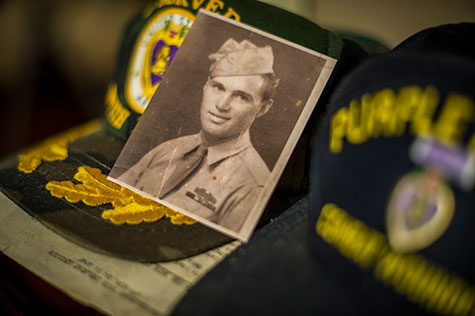 After formulating a plan, a team of UAB physicians throughout the School of Medicine’s Division of Cardiothoracic Surgery, Division of Cardiovascular Disease, Section of Electrophysiology and other areas went to work to execute it. The catheterization came back completely clean, so doctors proceeded to the next step, which was the valvuloplasty. Physicians cracked Gladden’s valve open, which had fused over time, and opened it up just enough so it could eject blood more freely and put less stress on his heart.

The hope then was that, if the valvuloplasty worked, Gladden’s heart function would improve on its less than 20 percent functionality, which it did. That meant doctors could proceed to the next and possibly most delicate phase in the process, which was the removal of his old pacemaker and implantation of a new one.

Tom McElderry, M.D., chief of the Section of Electrophysiology, performed the procedure. Gladden’s old pacemaker paced only the bottom right chamber, or right ventricle, of his heart. McElderry says some patients previously paced in this fashion can develop progressive shortness of breath and heart failure symptoms because the main pumping chamber of the heart, or left ventricle, is not squeezing in a synchronous fashion. That’s exactly what happened to Gladden.

“When somebody has a pacemaker and we’re thinking about upgrading them to a cardiac resynchronization device like we did with Mr. Gladden, probably the thing we worry the most about is infection,” McElderry said. “Anytime there is an existing pocket we have to open and then seal back up, there’s a 1 to 2 percent risk of infection. There are other factors — diabetes or a patient’s age — that might make them a little higher-risk for infection.

“Another major concern related to Mr. Gladden’s case is that we often use X-ray contrast dye when we put these wires in. Contrast can lead to trouble to the kidneys and even kidney failure, particularly in people with baseline kidney problems. With Mr. Gladden, my recollection is that we were actually able to do it without using any X-ray contrast dye. The overall thoughtful approach for Mr. Gladden’s case really worked out with a great outcome.”

While this resynchronization therapy was vital to the process and fraught with risks, Sasse believes it was the only way possible to restore Gladden to good health.

“We’re fortunate here at UAB to have multiple specialties that I don’t think a lot of places do have,” Sasse said. “Someone like Mr. Gladden would have been turned down by most electrophysiologists for the procedure Dr. McElderry performed. Even though I thought it was the right thing to do, I’m asking my colleagues to take risks that are very, very high. They don’t want the patient to do poorly; but I thought, given how well he did with his valvuloplasty, that he would do well with this, and he needed it to do well during his valve procedure.”

Four weeks after the new pacemaker was implanted, Gladden came back to UAB Hospital for his final procedure — the transcatheter aortic valve replacement, or TAVR. The procedure, which was performed by James Davies, M.D., associate professor of surgery in the Division of Cardiothoracic Surgery and chief of the UAB Section of Adult Cardiac Surgery, is for select patients with severe symptomatic aortic stenosis or a narrowing of the aortic valve opening. UAB is the first and largest comprehensive heart valve programin the state that has been on the leading edge of procedures like TAVR, which physicians have performed more than 300 times in UAB Hospital since 2012. 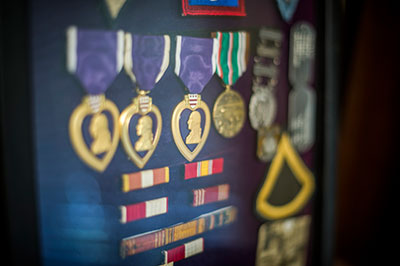 Patients with severe aortic stenosis like Gladden presented with are not candidates for traditional open chest surgery or are considered high-risk operable candidates. Davies performed Gladden’s TAVR procedure on a Monday. The veteran went home to Gadsden three days later, able to walk farther distances than he had in months without becoming short of breath.

“I feel normal now,” Gladden said. “I have a physical therapist who comes and walks with me a few times a week. I can walk now without even breathing hard, and before I had to stop and rest. I think I’ve surprised a lot of people.”

“This is the only time I can remember that we performed a TAVR procedure on someone in Mr. Gladden’s age group, with his degree of left ventricular dysfunction, and put in a device that would restore synchrony to his heart, and then do the valve replacement,” Sasse said. “At each step along the way, he did well. And when he did, we said, ‘Well, we can proceed with the next step.’”

The fact that the physicians were able to help someone with the stature and accomplishments of Gladden was not lost on them. The team of TAVR and Structural Heart Disease Program physicians — Oluseun Alli, M.D., Massoud Leesar, M.D., Davies and Sasse — all have appointments at the Birmingham VA Medical Center and treat veterans regularly. But it is not every day they get to meet and care for someone with three Purple Hearts.

“I was happy to be able to do my small part to help Mr. Gladden, who is just a great guy,” said McElderry, who also has a Birmingham VA Medical Center appointment. “It’s a tremendous opportunity for us as UAB physicians anytime we are able to take care of a patient like Mr. Gladden and all of our veterans we have the privilege of caring for.”

“You think you’ll never see someone with three Purple Hearts ever in your life,” Sasse said. “That’s really special. And he’s such a nice and personable guy. He’s always super appreciative, always has a smile on his face and always in a good mood. He survived all of this in World War II and all of these medical problems, and he’s still super positive and happy. It’s amazing we could take care of someone who has served our country in such a way.”