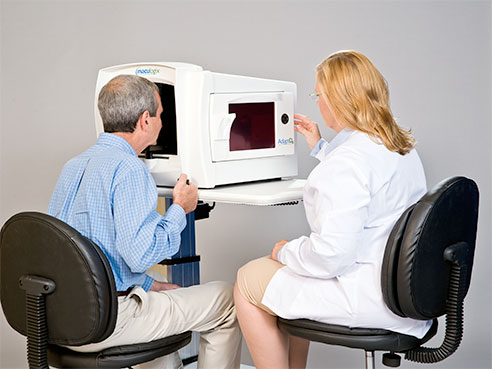 The AdaptDx machine, which measures dark adaptation. Photo courtesy of MacuLogix.Adults whose eyes are slow to adjust to the dark have a greater risk of developing age-related macular degeneration, according to new findings from the University of Alabama at Birmingham published online in Ophthalmology. AMD is the leading cause of blindness in older adults in the United States.

The findings validate a concept the UAB team first considered nearly 16 years ago: slowed dark adaptation is an early functional biomarker for AMD.

Dark adaptation refers to the time it takes for a person’s eyes to adjust to darkness after being exposed to bright light. The eye uses photoreceptors called cones and rods to convert light into a visual signal in the brain. Rods contribute to low light vision and night vision more so than cones. Cones take about nine to 10 minutes to adapt to darkness, while rods take longer — up to 30 minutes. The point where cones have adjusted and rods alone have completely taken over is called the rod-intercept.

Supported by a grant from the National Institute on Aging, part of the National Institutes of Health, the researchers studied 325 adults age 60 or older who were patients in the eye clinics of UAB’s Callahan Eye Hospital. All had healthy maculas with no degeneration. Three-quarters of the subjects had a rod-intercept of about nine minutes, which is in the normal range. Approximately 25 percent had abnormal rod-intercept, about 15 minutes.

All subjects were followed for three years. Those with the slower dark adaptation — the abnormal rod-intercept — were two times more likely to develop AMD than those with normal dark adaptation.

“This is the first study to show that abnormal dark adaptation is a precursor of age-related macular degeneration,” said lead author Cynthia Owsley, Ph.D., professor and vice chair for Research in the Department of Ophthalmology at UAB. “This gives us a biomarker for the disease that could have tremendous impact on our ability to develop and evaluate medications for AMD in the future.” 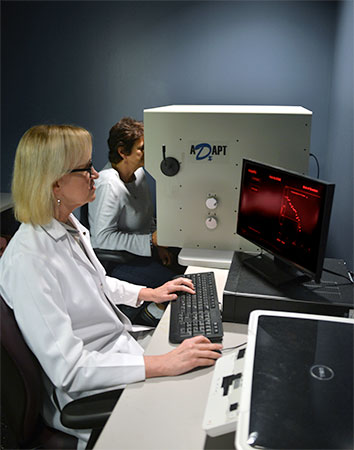 UAB investigator Cynthia Owsley measuring dark adaptation using a prototype research machine.Owsley says there are no proven effective treatments for early stage AMD. As medications are developed, a biomarker that can help track the onset or progression of the disease will be invaluable in evaluating the efficacy of those drugs.

“Development of new drugs is dependent on identifying targets on which those drugs might interact,” she said. “A better understanding of dark adaptation and its role in disease will help speed that process.”

In the late 1990s, Owsley and colleague Greg Jackson, Ph.D., then an assistant professor at UAB, first discussed the possibility that dark adaptation might play a role in AMD. They noted that many patients with AMD, and also some older adults in normal macular health, complained of poor night vision.

“We were excited about the possibility that dark adaptation could be valuable for understanding and managing AMD,” Jackson said. “At the time, there wasn’t a suitable tool for measuring dark adaptation, so the first order of business was to create one.”

With additional funding from the National Institute on Aging through its small business innovation program, Jackson built a prototype machine to measure dark adaptation. The device exposed a subject’s eye to a flash of bright light in an otherwise completely dark environment, a process known as bleaching. The length of time that passes before the patient detects a series of visual cues is measured to determine dark adaptation.

UAB holds patents on the technology, and Jackson is now chief scientific officer for MacuLogix, Inc., which builds a commercially available machine called AdaptDx® under license from UAB.

“It has taken a long time to get to this point, which is a seminal moment in this effort,” Owsley said. “From the initial concept to securing funding, arranging licensing of the technology and conducting clinical studies took some 16 years. Today there is a commercially viable device that research institutions such as UAB can use to quickly evaluate medications that might make a difference in people’s lives. It’s gratifying that, after 16 years, our hypothesis was validated.”

Next steps, according to Owsley, are to look for structural changes in the tissues of the eye that might be associated with poor dark adaptation and AMD. She also suggested that studies looking at changes in dark adaptation as AMD progresses could be very beneficial.