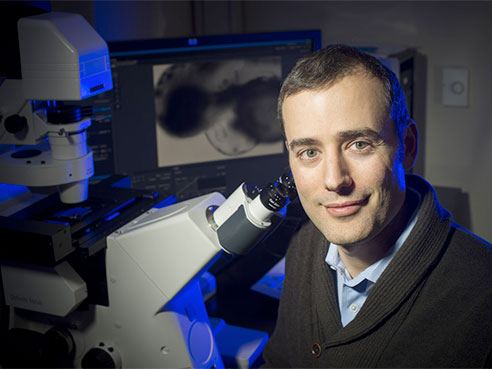 Daniel Gorelick, Ph.D., assistant professor in the University of Alabama at Birmingham Department of Pharmacology and Toxicology, has been awarded an Outstanding New Environmental Scientist grant from the National Institute of Environmental Health Sciences (NIEHS), part of the National Institutes of Health. The five-year grant totals $2.1 million.

He and four other “exceptional early-career scientists” will receive new grants totaling $2.5 million in the first year, as part of the Outstanding New Environmental Scientist (ONES) program, according to the NIEHS.

NIEHS created the ONES program to support researchers, in the formative stages of their careers, who conduct cutting-edge research to study how the environment influences human health. This highly competitive grant started in 2006 and has become a model for funding emerging scientists.

Gorelick is interested in understanding how exposure to byproducts of industrial combustion like dioxins and polycylic aromatic hydrocarbons cause abnormal development and functioning of the heart. These toxic pollutants activate a protein called the aryl hydrocarbon receptor. But how this receptor communicates with other proteins to create cardiotoxicity is not understood well. The activated receptor is a transcription factor that recruits cofactors to the genome to actively regulate gene expression.

Preliminary evidence suggests that the binding of different pollutants to the aryl hydrocarbon receptor leads to recruitment of different cofactors and to differential gene expression. Gorelick will investigate details of this communication using a zebrafish model.

“Our results at UAB could improve our ability to predict how exposure to dioxins or related pollutants will affect human health, and they will be critical for assessing acceptable exposure levels to many aromatic hydrocarbons,” Gorelick said. “Furthermore, the aryl hydrocarbon receptor is involved in the function of the immune system, and it may function abnormally in autoimmune diseases such as multiple sclerosis and rheumatoid arthritis. Our work to understand how the aryl hydrocarbon receptor communicates with other proteins may ultimately lead to improved treatment for autoimmune diseases where aryl hydrocarbon signaling is abnormal.”

Overall, the five 2016 ONES awardees will study how environmental chemicals such as arsenic, dioxins and DDT cause harm — including heart problems, insulin resistance and allergies — and how they are removed from the body through protective mechanisms.

“A ONES award gives promising environmental health scientists the opportunity to pursue innovative ideas early in their careers,” said Linda Birnbaum, Ph.D., NIEHS director. “When funding for research becomes scarce, young innovators start looking for other jobs. This is one of the best tools we have to retain their talent for research.”

In addition to Gorelick, the 2016 awardees are:

“The ONES awardees are a talented group of scientists with tremendous potential,” said Gwen Collman, Ph.D., NIEHS Division of Extramural Research and Training director. “We hope that receiving this grant at a pivotal time will propel them into successful careers in environmental health research.”