Taking the helm: Inspired by past mentors, new Department of Surgery chair plots a course for the future 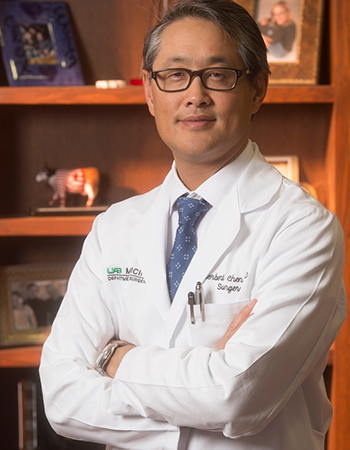 Growing up, Herbert Chen M.D., FACS, always believed he would one day follow in his father’s footsteps. The elder Chen was an orthopedic surgeon who, with his wife, had emigrated from Taiwan to the United States. Eventually, the family settled in Marshfield, Wisconsin.

“I had many role models,” says Chen. “Marshfield, a small, rural community in Wisconsin, has one of the largest clinics in the region. I had several opportunities to shadow physicians.” Chen considered becoming an orthopedic surgeon like his father, he says. But, through the influence and guidance of mentors, he charted his own path to become an internationally renowned surgeon-scientist specializing in endocrine cancers.

Last fall, Chen made the move from the University of Wisconsin School of Medicine and Public Health to become chair of UAB’s Department of Surgery and surgeon-in-chief of UAB Hospital. He succeeds Kirby I. Bland, M.D., who stepped down in 2015 after 15 years in the position.

Chen earned his medical degree from Duke University in 1992. At that time, he says he still planned to become a surgeon but soon realized that he could also pursue his other passion—research.

“I had always seen the role of the surgeon as a clinician,” he says, “but in medical school, I was exposed to academic/university surgeons who were also cutting-edge researchers and fantastic educators. After that, I knew I wanted to be an academic surgeon, too.”

Chen was accepted to the academic surgical program at the Johns Hopkins Medical Institutions, which required him to spend three years in a research laboratory. After rotating on the endocrine surgery service, he mulled over which research area to pursue. Because of Chen’s positive experience with endocrine surgery, a mentor assigned him to work with a professor who was investigating medullary thyroid cancer.

“In a way, my research area was chosen for me,” Chen says, “but I ended up loving it. Through my time studying the biology of endocrine cancers, taking care of patients with endocrinopathies, and performing minimally invasive endocrine operations, I definitely knew the field of endocrine surgery/oncology was for me.”

Upon finishing his post-doctoral research fellowship and general surgery residency at Johns Hopkins in 1999, Chen went on to complete an oncology and endocrine surgery fellowship in 2000 at Hopkins.

Afterward, Chen joined the University of Wisconsin School of Medicine and Public Health where he specialized in endocrine surgery for thyroid disease, hyperthyroidism, adrenal neoplasms, and neuroendocrine tumors. Chen also had his own laboratory and became a principal investigator on dozens of research grants focusing on endocrine cancers like pancreatic tumors, thyroid cancer, and adrenal neoplasms. He investigated the pathways which control the growth and spread of the tumors and studied how to design targeted therapies. Agencies like the American Cancer Society, the National Institutes of Health, and the Association for Cancer Research have funded his work.

He also rose through the leadership ranks at the University of Wisconsin. He became the Layton F. Rikkers, M.D., Chair in Surgical Leadership, chairman of the Division of General Surgery, vice-chair of research for the Department of Surgery, and professor in the Departments of Surgery, Biomedical Engineering, and Pediatrics.

Chen says he occasionally ran into his old mentor, Selwyn M. Vickers M.D., FACS, at medical meetings around the country. Vickers, now senior vice president for medicine and dean of the UAB School of Medicine, was the chief resident at Johns Hopkins when Chen worked there.

“He had been an outstanding leader as chief resident, and when I would see him at meetings he always took the time to talk to me and give me advice,” Chen recalls.

Years later, in July 2015, UAB announced that after a national search, it had offered Chen the position of chair of the Department of Surgery. He joined the department on Oct. 1.

“UAB has always been known as one of the best medical institutions, and one of the strongest surgical departments in the country,” he says. “Its research and educational programs are also well known. … What really attracted me to UAB was that Dr. Bland had built a fantastic department and Dr. Vickers was dean.”

As chair, Chen says he wants to build the research and education portfolio of the department by fostering more laboratory and health services research, and by helping more UAB surgeons to become independently funded surgeon-scientists. He says he also wants to train the next generation of surgical leaders who can take the helm at organizations like the American College of Surgeons, become heads of surgical departments and medical schools, and become much-needed surgeons in small communities.

Chen says he also wants to develop a more formal mentoring program in the department and create an academic curriculum that allows residents to develop the clinical side of their training as well as their research and other academic interests.

“I had fantastic mentors throughout my entire career,” says Chen. “I think probably the most important job we have as an academic surgeon is mentoring people and training the next generation.”