by Shannon Thomason
This tour will be her last formal extended tour, capping a lifetime of music, awards and human rights achievements. 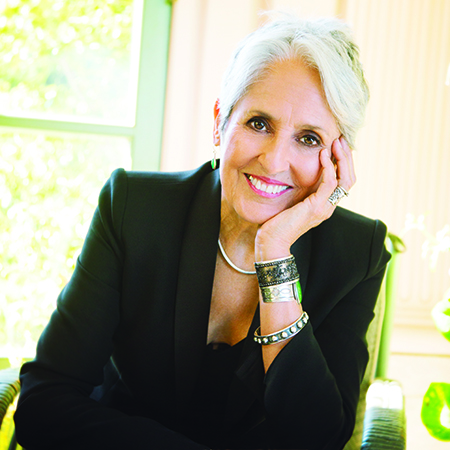 Joan Baez will bring her “Fare Thee Well” tour to Birmingham with a performance Wednesday, April 10, at the University of Alabama at Birmingham.

The performance is presented by UAB’s Alys Stephens Performing Arts Center. Tickets are $73, $63 and $53. UAB faculty and staff may receive $15 off two single tickets. A limited number of faculty/staff tickets are available. For tickets, call 205-975-2787 or visit www.AlysStephens.org.

Six decades after becoming a regular on the coffee house scene that was emerging around Club 47 in Cambridge, Massachusetts, Baez determined this would be her last formal extended touring. With her 2017 Rock and Roll Hall of Fame induction topping off a lifetime of awards and honors for her recordings and human rights achievements around the globe, Baez has never wavered in her mission, according to her artist’s statement, written by Arthur Levy. An artist of incalculable influence, “Whistle Down The Wind,” her first new studio album in a decade, gathers material by some of her favorite composers.

“I’m looking forward to being on the road with a beautiful new album about which I am truly proud,” Baez said. “I welcome the oppor­tun­ity to share this new music as well as longtime favorites with my audiences around the world.”

Speaking on one of her new songs, “I Wish The Wars Were All Over,” Baez says she does not know if a better world will come.

“But we have to do our work for a just and loving society whether the end comes tomorrow or whether we are still holding fast for generations to come,” she said. A 440-year-old manuscript of an American rebel imprisoned by the British in the Revolutionary War is the source for the song, adapted by balladeer Tim Erickson.

“Whistle Down The Wind” includes songs from Tom Waits (“Whistle Down The Wind,” “Last Leaf”), Josh Ritter (“Be of Good Heart,” “Silver Blade”), Eliza Gilkyson (“The Great Correction”) and Mary Chapin Carpenter (“The Things That We Are Made Of”). Ritter’s “Silver Blade” has been described by Baez as “a bookend to ‘Silver Dagger’ [the first song on her self-titled debut LP of 1960] at the end of this nearly 60-year career ... like something I would have picked up in Club 47 when I was 18.”