by Shannon Thomason
Sedaris, one of the world’s transcendent humorists, is also one of the most observant writers addressing the human condition today. 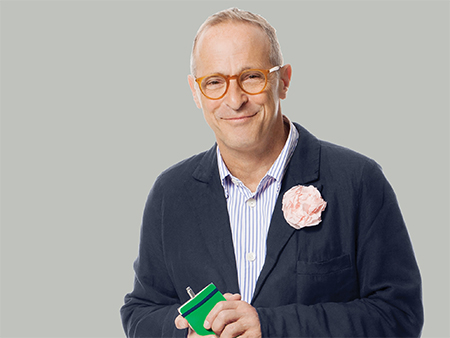 David SedarisMaster of satire David Sedaris will be live at the University of Alabama at Birmingham on Saturday, April 13.

Sedaris, one of the world’s transcendent humorists, is also one of the most observant writers addressing the human condition today. That is especially apparent in his latest book, “Calypso,” a collection of semiautobiographical stories described as his darkest, but warmest yet, published in May 2018.

Beloved for his personal essays and short stories, Sedaris has more than 10 million copies of his books in print, and they have been translated into 25 languages. In 2017, he released a collection of his diaries, titled “Theft By Finding: Diaries (1977-2002).” As a companion piece to “Theft By Finding,” Jeffrey Jenkins published and edited an art book of Sedaris’ diary covers, “David Sedaris Diaries: A Visual Compendium.” A second volume of his diaries is expected in summer 2019.

Of “Calypso,” NPR said, “ … with this 10th book, Sedaris demonstrates yet again what makes him the best American humorist writing today: a remarkable ability to combine the personal with the political, the mundane with the profane, slime with the sublime, and hilarity with heart.”

The San Francisco Chronicle declared, “Sedaris belongs on any list of people writing in English at the moment who are revising our ideas about what’s funny.” The Chicago Tribune said, “Sedaris’ droll assessment of the mundane and the eccentrics who inhabit the world’s crevices make him one of the greatest humorists writing today.”

Beloved for his personal essays and short stories, Sedaris is the author of “Barrel Fever,” “Holidays on Ice,” “Naked,” “Me Talk Pretty One Day,” “Dress Your Family in Corduroy and Denim,” “When You Are Engulfed in Flames,” and “Let’s Explore Diabetes with Owls.” He is the author of “Squirrel Seeks Chipmunk: A Modest Bestiary,” a collection of fables with illustrations by Ian Falconer. Each of these books was an immediate bestseller. His pieces regularly appear in The New Yorker and have twice been included in “The Best American Essays.” Sedaris’ original audio pieces can often be heard on the public radio show “This American Life.” He has been nominated for three Grammy Awards for Best Spoken Word and Best Comedy Album.

He and his sister, Amy Sedaris, have collaborated under the name “The Talent Family” and have written several plays, which have been produced at La Mama, Lincoln Center and The Drama Department in New York City.