This summer, UAB’s arts faculty get creative outside the college classroom

by Shannon Thomason
From the United States to Europe, these professors from the departments of Art and Art History, Music, and Theatre are in demand. 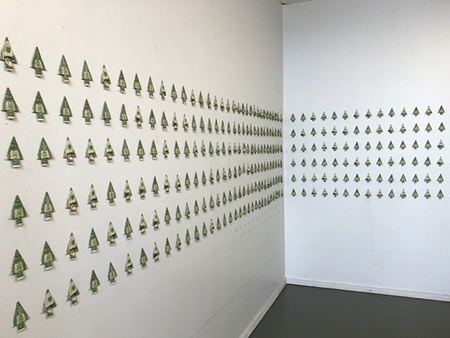 Approximately 580 $1 bills will be folded and arranged to recreate a typical commercial pine forest for “Eccentric Grids: Mapping the Managed Forest: Monetizing Trace.” Each summer, arts faculty in the University of Alabama at Birmingham College of Arts and Sciences pursue their passions and hone their crafts, from presenting, exhibiting and teaching to creating, directing and performing. UAB faculty will work in Alabama, Tennessee, Texas, Wyoming, Indiana, Ohio and Nebraska and in England, Scotland, Germany, Austria, Italy and Romania. Here is a round-up of what UAB’s arts faculty and staff are up to, and where, this summer.

Department of Art and Art History

Associate Professor of Graphic Design Doug Barrett, MFA: “This summer, I am installing a piece for the Evolving the Forest Conference at Dartington Hall, Devon, England, United Kingdom, June 19-21. The work will be on exhibition from June 19-Sept. 2. The site-specific installation is a collaboration with colleague Katerie Gladdys, assistant professor in the University of Florida School of Art and Art History. The work is titled ‘Eccentric Grids: Mapping the Managed Forest: Monetizing Trace.’ (pictured) This is an ongoing project examining how the hand of man marks, sorts, portions and divides the landscape through the commercial use of forest spaces and how evidence of this interaction is left on the land. Approximately 580 $1 bills will be folded and arranged to recreate a typical commercial pine forest. The arrangement of trees is based on the works of Austin Cary (1865-1936), considered the father of Southern forestry.” 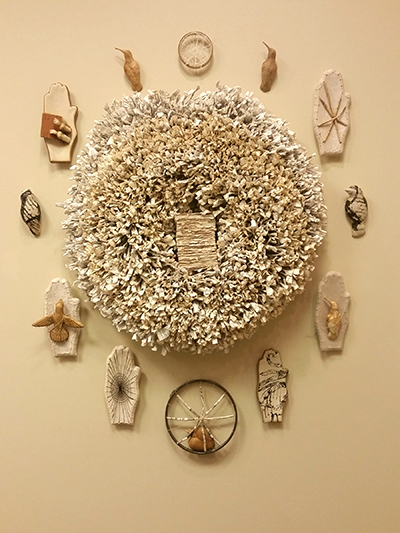 Works by Doug BaulosAssistant Professor of Drawing and Bookmaking Doug Baulos, MFA: “This summer, I’m completing work for a solo exhibition at the new Shelby County Arts Center. It is a brand-new center, and I will be the first artist showing there this September. This work is being supported by an individual artist grant I received from the Alabama State Council on the Arts. I am using my dye garden at the UAB gardens for a majority of the work and the outreach I have done with Advanced Placement high school students around the state. I am also installing a multimedia installation at the ICOSA Gallery in Austin, Texas. ICOSA showcases a diverse range of contemporary art and programming. The exhibition I’m featured in focuses on national and internationally known artists who use re-purposed or upcycled source materials.” http://dougbaulos.com

Professor of Painting and Drawing Gary Chapman, MFA: Chapman is completing a commissioned portrait of a documented Holocaust victim for the Birmingham Holocaust Education Center. He will also teach a one-week workshop, “Charcoal: Expressive Mark Making, A Painter’s Approach To Drawing,” at Arrowmont School of Arts and Crafts, June 9-15.

Assistant Professor of Sculpture Stacey M. Holloway, MFA: Holloway will have a solo exhibition in Indianapolis, Indiana, at Edington Gallery on June 14-July 13, called “Curiouser and Curiouser.” The exhibition is a body of surreal installations that focus on interspecies bonds or altercations, as well as the outcasts, outsiders and foreigners of a herd. She will also work on a tactile sculpture for the new visually impaired program at the Birmingham Museum of Art.

Professor of Art History Heather McPherson, Ph.D.: “In mid-July, I will attend the International Conference on the Enlightenment in Edinburgh, Scotland, where I will present a paper on ‘Image/Counter-Image: Contesting Celebrity in Graphic Satire.’ The paper examines the multivalent role caricature played in fueling celebrity and bringing public personalities down from their lofty pedestals by ridiculing their appearance, private lives and personal foibles. Isaac Cruikshank’s ‘The Strollers Progress,’ (1809), a series of six prints exposing the ignominious origins and flawed character of actor John Philip Kemble, serves as a lens for exploring the complex relationship between biography and celebrity and the agency of graphic satire in the long 18th century.”

Assistant Professor of New Media Elisabeth Pellathy, MFA: Pellathy will be exhibiting in the Equilibrium Exhibition during the Venice Biennale, May 10-Aug. 1. Equilibrium features the works of 20 international artists, and serves as the initial phase for Art Science Exhibits to broadcast environmental recovery projects internationally. Equilibrium is organized by Art Science Exhibits, based in Humboldt-Universität zu Berlin, and hosted by Palazzo Albrizzi-Capello Associazione Culturale Italo-Tedesca (Italian-German Cultural Association). 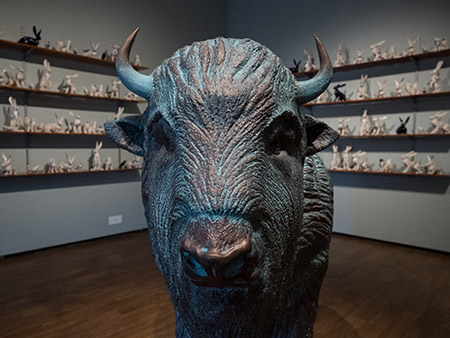 Works by Stacey Holloway from "Curiouser and Curiouser."

Professor of Clarinet Denise Gainey, DMA: “This summer, I am recording a CD titled ‘Play Pretty’ with my Amicitia Duo partner, Diane Barger (professor of clarinet at the University of Nebraska-Lincoln), and our collaborative pianist, Mark Clinton (professor of piano at UN-L), to be released by Potenza Music. This project is partially supported by funds from a UAB Faculty Development Grant and the UAB Department of Music. I will also be performing twice at the International Clarinet Association’s ClarinetFest, to be held in Knoxville, July 24-28. I will play recitals with the Amicitia Duo and the UAB Chamber Trio (with James Zingara, trumpet, and Chris Steele, piano) and will be participating in board meetings for the International Clarinet Association as president-elect in addition to attending the conference. I’ll also be preparing for the UAB Chamber Trio’s tour to England in early October, where we will present recitals and masterclasses in connection to the British composers who wrote pieces for our ensemble.”

Distinguished Professor of Piano and Artist-in-Residence Yakov Kasman, DMA: Kasman will be a part of the Romanian-American festival in Sibiu, Romania, performing Tchaikovsky and Enescu trios June 27 and Gershwin’s “Rhapsody in Blue” as a soloist with Sibiu Philharmonic in the closing gala on the main city square June 30. In July, he will teach masterclasses as a faculty member at the International Keyboard Institute and Festival in New York. “I am also looking forward to attending the 16th International Tchaikovsky Competition in Moscow in June. I am hoping to bring some of the pianists I like to perform in the UAB Piano Series.”

Associate Professor of Music Steven Roberts, DMA: “In July, I will lead the UAB Jazz Ensemble and UAB Jazz Combo on a 24-day performance tour in three European countries. The trip will begin in Munich, Germany, and continue into Italy, where a classical subset of the band will perform at a service at the famous St. Mark’s cathedral in Venice. We will then continue into Kappl, a town in the Austrian Alps, where we will rehearse, hike and do a final performance for the locals. The bulk of the trip will center around the city of Muenster, Germany, where I have made relationships with many venues and festivals from three previous UAB Jazz European tours.”

Associate Professor of Voice and UAB Opera Director Kristine Hurst-Wajszczuk, Ph.D.: “I will be running the National Association of Teachers of Singing summer workshop at St. Olaf College next month. In August, I’ll attend the Summer Session on Contemplative Learning at Smith College.”

Assistant Professor of Music Craig Brandwein, M.A., was a guest on the Music Student 101 podcast with UAB alumni Jeremy Burns and Matthew Scott Phillips, where he discussed composing for film and television along with other topics in the field of working in and teaching music technology. He also spent time at The Parlor Recording Studio in Nashville, Tennessee, producing and recording five songs with an independent artist. 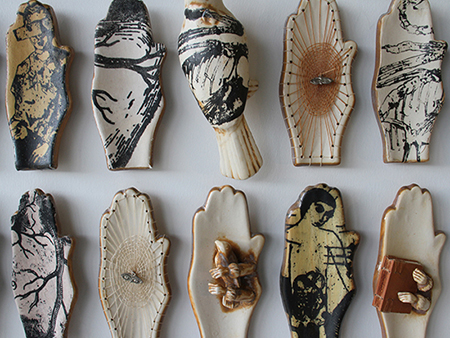 Head of Musical Theatre and Assistant Professor Valerie Accetta, MFA: “I will be directing ‘Matilda’ at Weathervane Playhouse in Ohio, and I will be on a panel at the Estill International Symposium in London in August. It should be a fun summer!”

Assistant Professor Roy Lightner plays the lead role, Seymour, in Red Mountain Theatre’s production of “Little Shop of Horrors.” He will also direct and choreograph "Pippin" for Music Theatre of Kansas City, opening June 13. He will teach master classes and be a guest adjudicator for two national dance conventions for dancers, one in Ocean City, Maryland, and the other in Hershey, Pennsylvania. He will also direct and choreograph an original show he created for Transcendance Theatre Company in Sonoma, California, "Those Dancin' Feet."

Professor of Scene Design Cliff Simon, MFA: “This summer I am designing ‘My Fair Lady’ for Red Mountain Theatre Company at the Dorothy Jemison Day Theatre at the Alabama School of Fine Arts. It is being directed by David Callaghan, chair of the University of Montevallo Theatre Department. It opens June 7 and runs until June 30. I am also designing two outside shows at the moment. One is “La Cage aux Folles” for the Riverside Theatre in Vero Beach, Florida and the second is “Dracula,” written and directed by Steven Dietz, who was once again named one of the most produced playwrights in America (excluding Shakespeare), placing eighth on the list of the Top Ten Most Produced Playwrights in America, tied with Tennessee Williams and Edward Albee for number of productions. So I am in good hands! “Dracula” opens this fall at Zach Theatre in Austin.”