by Shannon Thomason
Wang, a groundbreaking young musician, is the first accordionist to win a place on the roster of Young Concert Artists in its 58-year history. 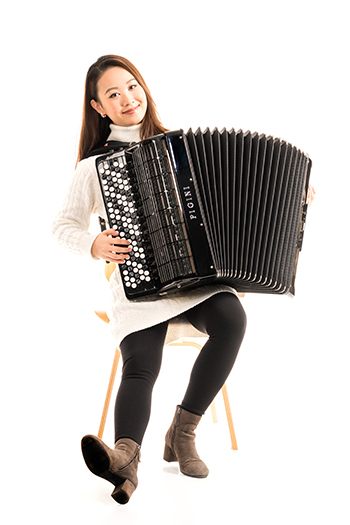 , the first accordionist to win a place on the roster of Young Concert Artists in its 58-year history, will perform at the University of Alabama at Birmingham on Wednesday, Oct. 2.

The 7 p.m. performance is presented by UAB’s Alys Stephens Performing Arts Center as part of its ArtPlay Parlor Series. The performance will be in the intimate parlor of the ArtPlay house, 1006 19th St. South. Tickets are $37, $10 for students. Call 205-975-2787 or visit AlysStephens.org.

Praised for her captivating stage presence and performances that are technically and musically masterful, Wang is a groundbreaking young musician. Her hourlong interview and performance on the 2,145th episode of New York WQXR’s “Young Artists Showcase” marked the first appearance of a solo accordionist on the program.

In 2018, Musical America named Wang “New Artist of the Month,” and Naxos released its first-ever solo accordion CD, Wang’s “On the Path to H.C. Andersen.” It features music by Danish composers including “The Little Match Girl,” written for Wang by Martin Lohse, and was nominated for the prestigious DR (Danish Radio) P2 Prize 2019. In addition to Lohse, Wang’s artistry has also been recognized by other contemporary composers, with works dedicated to her by James Black and Sophia Gubaidulina, with whom she has worked extensively, according to Wang’s bio.

Come early to ArtPlay at 6 p.m. for an Inside the Arts talk. Learn the history of and fun facts about the accordion from a local accordion player.