UAB presents Weezer free on the Green on Oct. 18 for 50th anniversary

by Shannon Thomason
The 7 p.m. outdoor concert is free and open to the public, but tickets will be required for entry. Tickets will be available Sept. 19 for UAB and Sept. 20 for the public. 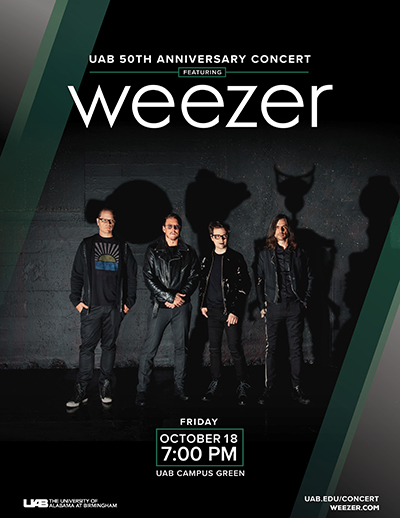 Grammy Award-winning rock band Weezer will headline a free concert Friday, Oct. 18, presented by the University of Alabama at Birmingham in celebration of the university’s 50th anniversary.

Rapper Gashi is the opening act. The concert is set for 7 p.m. outdoors on UAB’s Campus Green. Free and open to the public, tickets will be required for entry. All ticket transactions will be limited to two each.

This year marks UAB’s 50th anniversary, and the university is celebrating throughout 2019, including its weeklong Homecoming celebration Oct. 13-19. UAB Football will play Old Dominion University on Saturday, Oct. 19, at Legion Field.

In 2016, Weezer released their 10th studio album, “Weezer (The White Album),” a self-proclaimed beach album that debuted at No. 1 on Billboard’s Rock/Alternative chart, and Top 5 on the Billboard 200 chart. Their 2017 album, “Pacific Daydream,” spawned a No. 1 hit, “Feels Like Summer,” on Alternative Radio and was nominated for the Best Rock Album Grammy Award. This year, Weezer released a cover of Toto’s “Africa,” which shot to No. 1 and went viral; it was included on “The Teal Album,” an all-cover album which included A-Ha’s “Take on Me,” TLC’s “No Scrubs,” ELO’s “Mr Blue Sky” and many more. The band’s latest is the long-awaited “Weezer (The Black Album),” which came out March 1.

The event is sponsored by the UAB Bookstore.

The idea to host a free concert on the Green was made by the UAB 50 committee, a group of students, staff and faculty at the university.

“We are excited to bring this well-known band to campus as part of the 50th anniversary celebration and as a signature event for Homecoming,” Watts said. “My thanks to the multiple groups responsible for planning the various events we have had happening throughout the year to celebrate. Their work embodies the UAB shared value of collaboration, and will prove to be an event to remember for years to come.”