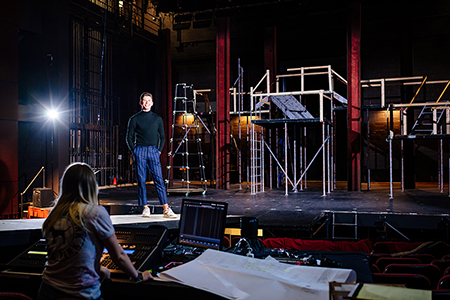 Austin Helmers with the set he designed for "Hair" under construction in the Sirote Theatre.Student designer Austin Helmers turned to legendary desert happening Burning Man for inspiration in designing Theatre UAB’s upcoming production of “Hair.”

The annual festival heavily influenced the entire production, says Helmers, a University of Alabama at Birmingham senior designing the “Hair” set. Helmers is majoring in theater, with a concentration in design and technology, in the College of Arts and Sciences’ Department of Theatre, and a minor in film.

Burning Man is shaped by self-expression, community, inclusivity and equality, themes that are also prevalent throughout “Hair,” Helmers says.

The desert happening is known for its large-scale interactive art installations, often climbable and kinetic, influenced by maker culture. When looking at the message and macrocosm of “Hair,” the modern counterculture festival came as a natural form of inspiration.

“This set gives the tribe, a representation of human commonality and unity, the ability to thrive in a space that represents them and allows them to be free,” Helmers said. “Perhaps my favorite element of the set is what I have deemed the ‘Flower Tower,’ a structure that is directly influenced by the art installations of Burning Man. This set is unique, and the production provided challenges that perhaps others would not have; but I am extremely grateful for this opportunity and proud to have created this as my first set design.”

The Flower Tower will be 12 feet tall, and feature prominently throughout the play, offering a central place for the actors to gather. The Flower Tower is a symbolic representation of the tribe and the sharing of culture and community. It moves around the stage just as a cast member does, and plays an important part of the storytelling, says director Roy Lightner.

When it comes to the design process, Helmers says he has two particular moments that always stand out: the initial brainstorming session and when the set starts to come together in the space.

“The beginning of the design process is extremely exciting; invigorating ideas are ignited, and creativity is at an all-time high,” he said. “When the set is finally in the space and you are able to physically touch it and be with it, it is incredible.”

Lightner says Helmers has brought exciting vision, perspective and creative energy to “Hair” and been a great collaborator. Helmers was assistant scenic designer for “Savage,” an original play created by Karla Koskinen and world-premiered by Theatre UAB in the 2018-2019 season. He was also scenic painter for “Hay Fever” and “Savage,” did properties construction for “A Midsummer Night’s Dream” and “Working,” was light board operator for “Hay Fever,” and did lighting design for “I’ll Take Care of You” in the latest Festival of 10-Minute Plays.

Helmers is a member of the UAB Honors College and the Sigma Alpha Lambda National Leadership and Honors Organization, and was a proud member of the UAB Marching Blazers, UAB Concert Bands and UAB Blazer Band. He made the hard decision to leave music to focus on his scenic design journey in preparation for graduation. He will also design the set of another Theatre UAB mainstage production this season, “The Glass Menagerie” by Tennessee Williams.

He chose his degree path as a freshman after taking the department’s Intro to Theatrical Design class and attending Theatre UAB’s production of “Vinegar Tom” by Caryl Churchill. The entire production left him speechless, he says. 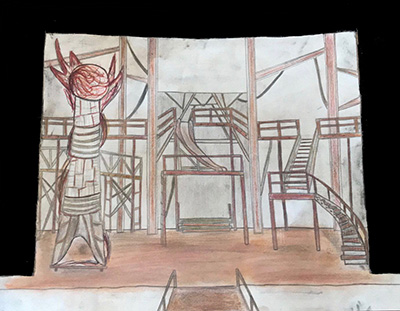 The original rendering of the set design for "Hair." “I left the theater saying to myself, ‘I have to do this. I do not know how I fit into this world of theater, but I am going to find my place,’” Helmers said. That semester, he changed his major to theater, eventually discovering an area where he could excel in the second semester of his sophomore year. What changed? His class with Cliff Simon, who became his “incredible” mentor.

Simon lauds Helmers as smart, efficient, responsible, affable and talented in all kinds of ways, “not the least of which is his ease and comfort with dealing with one situation after another that requires his full presence of mind.” His design approach is completely fresh and spontaneous.

“That was the first time I had been introduced to the process of not only scenic design, but design in general,” he said. “I knew then that design was what I was meant to do. I spent the next year perfecting my craft under Cliff’s direction along with having the opportunity to be an assistant scenic designer on the world premiere of ‘Savage.’ Now I am here!”

Helmers hopes to become a professional scenic designer and work in the field he admires so much.