by Shannon Thomason
They missed out on their last recitals, but two piano students have announced their graduate school plans, and a drum major for the Marching Blazers has his pick of medical schools. 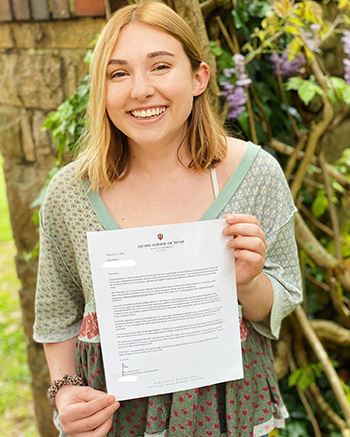 Mira WalkerSpring usually features senior recitals for music students at the University of Alabama at Birmingham. While this semester did not go quite as planned, students from the College of Arts and Sciences Department of Music are pursuing their dreams.

“Finding things to celebrate in the midst of chaos — I’m happy to announce that I accepted an offer of admission to pursue my Master of Music in piano, as well as an associate instructor position at Indiana University’s Jacobs School of Music! So excited to see what the next few years in Bloomington will bring. I’m sad that my time at UAB was cut shorter than expected, but I certainly wouldn’t have this opportunity without the endless dedication and support of my dear teacher Yakov Kasman, and the support of the UAB Department of Music. So deeply thankful to everyone who has supported me on my musical journey so far!”

That was the Facebook post by Mira Walker, who came to UAB to study piano with Distinguished University Professor Yakov Kasman, DMA. Walker is from the Birmingham area and had the privilege of studying with Kasman and his wife, Tatiana Kasman, for several years before college. Walker says music has been part of her life for as long as she can remember.

“My mother was a musician, so I grew up singing and started taking piano lessons with my mom at age 5,” Walker said. “I couldn’t imagine my life without music; it is integral to who I am as a person. I still enjoy singing and collaborative work very much in addition to my primary focus on solo piano, so I have also enjoyed singing in choirs and collaborating with other musicians. Having such wonderful piano faculty made my decision to come to UAB easy.”

Walker is in the Honors College University Honors Program and the Department of Music’s Young Performing Artists Program. This has given her the opportunity to challenge herself academically and artistically. Through the University Honors Program, she was able to attend and perform at several national collegiate honors conferences and take honors seminars that turned out to be her favorite undergraduate classes. As a Department of Music student, Walker was able to go to Kiev, Ukraine, to study with Kasman and play with the Ukrainian National Symphony, present many recitals in Hulsey Recital Hall, and compete successfully in numerous competitions.

“I’m so grateful for all of the opportunities and outstanding professors I’ve had at UAB,” Walker said. “I’m sad that our usual end-of-the-year concerts are unable to happen this year; but I think now more than ever the world understands the healing power of music, and playing the piano is certainly giving joy and purpose to my days.” 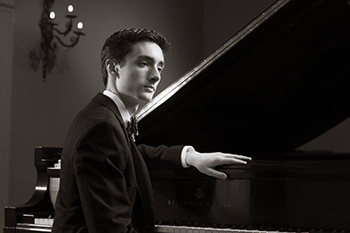 Jacob Skiles, who began studying piano at the age of 8, will pursue his Master of Music degree in piano performance at Florida State University, where he will also be a teaching assistant.

Skiles decided on this career path in middle school after attending the senior recital of his teacher’s most advanced student. The next step in his journey was attending high school at Douglas Anderson School of the Arts in Jacksonville, Florida, where he grew up. When it came time to apply for colleges, he discovered UAB because of Kasman. This was a name he knew, he says, because of his success in the Van Cliburn competition.

“Upon learning that he taught here in Birmingham, the city I was born in and grew to love over the years, I knew I must consider coming here to study with him,” Skiles said. “It was probably one of the greatest decisions I’ve made for my musical career. His insight, and musicianship, is unparalleled, and studying with him here at UAB has been a remarkable experience.”

Skiles says he and Kasman share a love for Russian piano music, and that has certainly found its way into his music programming decisions from year to year. Skiles also cites the trip to study with Kasman and perform piano concerti with the National Symphony Orchestra of Ukraine in Kiev as “one of the highlights” of his time at UAB.

“Perhaps one of the most unique things we have done during my time here has been studying and learning Norwegian-Russian composer Issay Dobrowen’s Piano Concerto,” Skiles said. “This is an extremely rare work; but in the words of Dr. Kasman, it is ‘deserving of a place next to the piano concerti of Medtner and even Rachmaninoff.’ There is only one recording of this work ever made, and finding a copy of the score was very tedious — it took nearly a year to obtain it. Unfortunately, we were unable to perform this work this semester due to COVID-19; but I plan [on] returning to Birmingham later on so that we may perform and record the first movement of this piece once UAB returns to normal operations.”

Another part of Skiles’ UAB experience has been with the Honors College Science and Technology Honors Program led by Professor Diane Tucker, Ph.D. Through this program, he has been able to work with Department of Physics Associate Professor Ryoichi Kawai, Ph.D., on research of mathematical representations and analysis of musical rhythm, research they hope will contribute to developing a greater mathematical understanding of music.

“In the future, my hope is to become a college professor for piano; that way, I may have a career that combines teaching and performing,” Skiles said. “I plan on eventually pursuing a doctoral degree in piano performance after completing my master’s.” 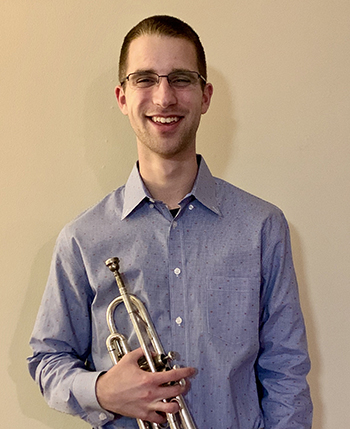 Jackson Brunner studied trumpet in the Department of Music and was a drum major for the Marching Blazers. However, music was not his only gig at UAB.

Brunner is graduating with a Bachelor of Science degree in chemistry, a Bachelor of Arts degree in music and a Spanish minor. He is in the Honors College Personalized Pathway.

“During my time here, I was able to serve as drum major of the Marching Blazers for two consecutive years, perform around the world with numerous ensembles within the Department of Music, and devote much of my time to exploring my artistic interests,” Brunner said. “I also took part in the Chemistry Scholars Program, which allowed me to serve as a teaching assistant for introductory, general and organic chemistry courses, and I have been working in a research lab with the Department of Genetics for the past two years. I applied to medical school this past cycle and was accepted at three institutions.

Brunner deliberated carefully and recently decided that he will be attending the University of Florida College of Medicine in the fall.

“While I look forward to beginning my medical training in the fall, I look back fondly on the past four years and value all that my time at UAB has taught me,” he said.