by Shannon Thomason
The 41st annual Telly Awards awarded it the Gold Telly for Education and 12 Silver and Bronze awards for music, directing, editing, social impact, writing, cinematography and more. 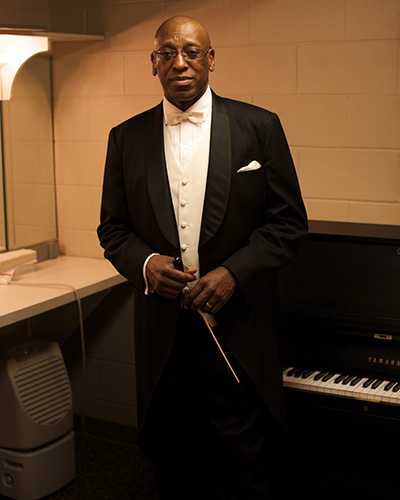 Directed by filmmaker David Macon and University of Alabama at Birmingham University Professor of Music Henry Panion III, Ph.D., “Dreams of Hope” celebrates the unifying power of music and spirit of resilience. It tells the story of a historic performance at the 16th Street Baptist Church in Birmingham more than 50 years after a hate crime there killed four African American girls. An initiative called Violins of Hope contributed painstakingly restored musical instruments to the event, including violins recovered from Holocaust concentration camps, symbols of resilience in the face of hate, discrimination and racism. Musicians and artists, including some from UAB, performed and contributed to the creation of the concert and documentary.

The full list of awards for “Dreams of Hope” includes:

“Dreams of Hope” blends concert performance footage with behind-the-scenes interviews chronicling the event’s preparation and reflecting on its significance. Concert footage features the premiere of “Dreams of Hope for Solo Violin & Orchestra” by acclaimed composer and conductor Panion, commissioned especially for this concert. Alongside the Dreams of Hope Orchestra, the concert features solo violinist Caitlin Edwards, vocalists Valerie Smith and Lenora Goodman-Panion, dancer Kelsey Ebersold, and the Miles College Choir. Presented and distributed by American Public Television, it has had more than 300 separate broadcast airings on public television stations nationwide since its premiere in February and has been highlighted during both Black History Month and Jewish Holocaust Remembrance holidays.

“It has been amazing to see how so many people across the nation have embraced our film,” Panion said. “To have it receive multiple encore airings in markets such as Los Angeles, New York and Chicago is just remarkable. ‘Dreams of Hope’ will air for the first time in Minneapolis on Father’s Day of this year.

Mayor of the City of Birmingham Randall Woodfin described the film as “a powerful testimony of inclusion, unity and hope for a generation of leaders. It is my desire that this message of love, empathy, compassion and triumph will be embraced there and throughout the world in these most-troubled times.”

A note to Panion from the Telly Awards announcement stated “Now more than ever, we are thrilled to recognize creators like you who are bringing high-caliber stories to our screens. Once again, congratulations on being named a Gold Telly Award Winner!”

Panion teaches music theory and technology in the College of Arts and Sciences’ Department of Music. He is best known for his work as conductor and arranger for superstar Stevie Wonder, for whose performances and recordings he has led many of the world’s most notable orchestras. The two-CD set “Natural Wonder” features Panion conducting his arrangements of many of Wonder’s award-winning, chart-topping songs with Wonder and the Tokyo Philharmonic. He owns the studio Audiostate 55 Entertainment.

“To be recognized alongside organizations such as HBO, NBC, Disney, Universal, the History Channel and Viacom is remarkable,” Panion said. “And to learn that our single film has won more (awards) than many entire networks have won is simply mind-blowing. I am grateful to the Violins of Hope Birmingham Committee for having been given this opportunity to produce ‘Dreams of Hope.’

The Telly Awards is the premier award honoring video and television across all screens. Established in 1979, the Telly Awards receives more than 12,000 entries from all 50 states and five continents. Entrants are judged by ​The Telly Awards Judging Council​ — an industry body of more than 200 leading experts including advertising agencies, production companies and major television networks. Winners are selected for recognition based on excellence in the areas of Branded Content, Commercials and Marketing, Immersive and Mixed Reality, Non-Broadcast, Series / Shows / Segments, and Social Video.