by Shannon Thomason
Dressing as a priest, a high-status figure, was a way for Soller to get past discrimination; but he was racially profiled for wearing the habit and haircut of the clergy as a man of color. 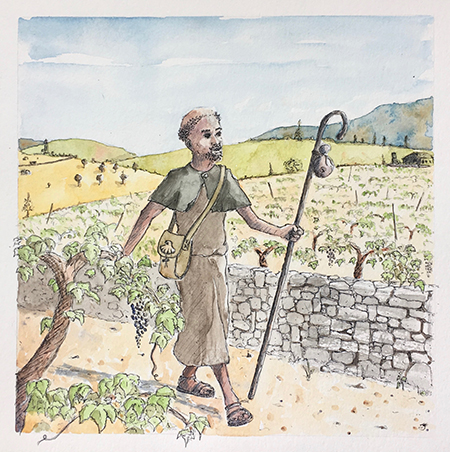 Clinton Lariscy, "José Soller in the Vineyards," 2019, watercolor on paper, 20×20cm. Private collection belonging to the author. Original artwork commissioned by the author.A new book tells the story of a man jailed for impersonating a priest in 1693 Spain, when he was likely trying to escape racial persecution.

It gives readers a fascinating look at a centuries-old legal case against a man on pilgrimage and shows how Iberians of black-African ancestry faced discrimination and mistreatment.

The book is “Mulatto • Outlaw • Pilgrim • Priest: The Legal Case of José Soller, Accused of Impersonating a Pastor and Other Crimes in Seventeenth-century Spain” (Brill). It was written by the University of Alabama at Birmingham’s John K. Moore Jr., Ph.D., associate professor of Spanish in the College of Arts and Sciences Department of Foreign Languages and Literatures.

It is both a critical study and scholarly translation of the case from the late 17th century, in which the Hapsburg Empire brought charges against Soller, who was on pilgrimage from Lisbon, Portugal, to Santiago de Compostela in Spain. Moore has long been fascinated by the case, titled “His Majesty’s Representative v. José Soller, Mulatto Pilgrim, for Impersonating a Priest and Other Crimes.”

“Soller’s upward mobility is a form of self-fashioning that flies in the face of society’s prevailing stereotypes regarding the ‘proper’ role of people of black-African ancestry,” Moore said. “It’s obvious how this man’s story parallels the discrimination that people of color face today in our own society. I honestly think Soller got better treatment in 17th-century Spain than many black people currently receive in the United States. Soller at least had the ability to stand trial and present a defense.”

In Ourense, Spain, 1693, Soller gets a fresh tonsure haircut and new fabric for his priest’s outfit. Right after he leaves town, Soller is anonymously denounced and subsequently apprehended along his journey. In the trial documents, the deputy prosecutor describes Soller as “a mulatto pilgrim who seems to be a slave.” The word “mulatto” comes from “mule,” and this dehumanizing language is tragically relevant in a society that equated any shade of blackness with slavery, Moore says.

“Dressing as a priest, a high-status figure, was a way for Soller to get past all the discrimination for a little while; but eventually he was racially profiled for wearing the habit and haircut of the clergy as a man of color,” Moore said. “The fact of Soller’s partial black-African ancestry means that, at least in the mind of the Spanish authorities, Soller is more likely to be a fugitive than a priest.”

In the trial, the chief magistrate convicts Soller of being a vagabond and sentences the man to row unpaid in the king’s galleys for two solid years, “on penalty of death by hanging.” Black people in Portugal and Spain formed a disproportionately high percentage of galley slaves relative to their numbers in the population as a whole, Moore says.

“This book is an opportunity for readers to have an armchair travel experience in Portugal and Spain since so many of us are confined right now,” Moore said. “There’s a lot of vicarious adventure, and misadventure, to be had in José Soller’s journey, trial and probable jail break. We also can learn about a black life that matters still today.” 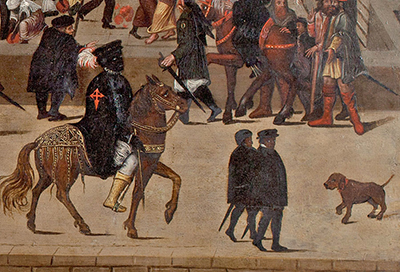 Detail from "Chafariz d’el Rey in the Alfama District," ca. 1570‐80, anonymous Flemish painting, oil on wood, 93 x 163 cm, The Berardo Collection, Lisbon, Portugal. “Mulatto • Outlaw • Pilgrim • Priest” illuminates an era of faith and devotion in which religious pilgrims would frequently make long journeys to sacred sites, including Santiago de Compostela, which remains one of the most famous pilgrimages in the world. The book is also illustrated with artwork from the era.

In 2015, Moore received a Research Fellowship Award from the College of William & Mary’s Institute for Pilgrimage Studies to help tell the story of this fascinating “mulatto pilgrim.” In 2016, he was awarded a fellowship from the American Council of Learned Societies to continue work on the project; in 2017, he received a fellowship from the National Endowment for the Humanities that helped him finish the work and land the Brill contract. Based in the Netherlands, Brill has been in business since 1683, and Moore says he is honored and humbled for “Mulatto • Outlaw • Pilgrim • Priest” to appear in its Medieval and Early Modern Iberian World series.

“The project is highly interdisciplinary,” Moore said. “It involves not just art history but also history itself, race and ethnicity, pilgrimage and religion, literature and culture, Hispanic studies, and legal history. Soller’s story is a micro-history that encompasses myriad fields.”

Soller appears never to have served out his sentence because he does not show up for his own appeal of the judge’s ruling. Soller was tried on appeal “in absentia,” meaning he was not present in court and should have been. The most likely explanation is that by this point Soller already had escaped from jail, probably to the nearby haven for vagabonds known as Couto Mixto. Whatever the case, José Soller remains elusive to the very end, Moore says.

Moore’s book is available online via UAB Libraries. Library patrons not only can access a PDF of the whole book with an interactive table of contents but also will be able to purchase a $25 black-and-white paperback copy via Brill’s MyBook program. Any institution or library that purchases the e-book will be able to provide these same options for its library patrons or members.