His music deserves to be published and performed by serious musicians all over the world, says his teacher, Yakov Kasman, DMA, Distinguished Professor of Piano in the College of Arts and Sciences’ Department of Music and Van Cliburn Silver Medalist.

“His music is exciting, fresh, sincere, very well-written for the piano, as he is an excellent pianist himself, and most importantly, his music has its own recognizable style,” Kasman said. “Eric chose a career of an engineer; but he continues to compose, and I hope he always will.”

Mobley graduated in 2017 with a Bachelor of Science degree in electrical engineering and a minor in music technology and went on to get a master’s degree in information engineering and management from the UAB School of Engineering in 2019. He was also a member of the Honors College’s University Honors Program.

Mobley won in the solo piano category. The composition was conceived while studying at UAB with Kasman. Primarily a jazz composer and pianist before his studies at UAB, Mobley says his passion for classical music was awakened with the help of the Kasman family, whom he praises as “insanely gifted.” 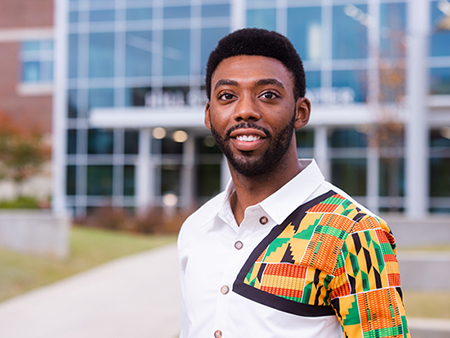 Eric MobleyAt UAB, he began exploring the synergies between jazz and classical, performing and writing in both, as well as a variety of other styles such as Latin and electronic.

“I had been delving further into classical music and become familiar with the sonata form, so I figured, either through optimism or foolishness, that I would try my hand at one,” Mobley said.

It was immediately clear that Eric has a natural — and very rare — gift for composing, Kasman says.

“He is not afraid to compose in the most complex musical forms such as sonata or concerto; he is writing music for different instruments and ensembles, including a multi-movement piano quintet and also a brilliant set of pieces for one piano four hands,” Kasman said. “His style is a very unique combination of jazzy harmonies and rhythms, connected with strong influence of Rachmaninoff’s and Prokofiev’s musical styles.”

He also studied under Tatiana Kasman, and both the Kasmans were instrumental in developing his skill as a pianist and encouraging his pursuit of composition by providing him with opportunities to present his work, Mobley says. He studied alongside eldest daughter Aleksandra Kasman, also in the UAB Piano Studio. Aleksandra Kasman set him on this musical path, he says.

“If she were a talent scout, I would have to say that she ‘discovered’ me and ultimately encouraged me to begin exploring classical music and composition,” he said. “She’s not only a supporter of mine, but also serves as an inspiration as I have not met someone as talented as she that is the same age as me.”

In January, Mobley put on a concert of all original works featuring pianist Aleksandra Kasman and members of the Alabama Symphony Orchestra. His music has also been performed at regional and national conferences and in promotional materials for entities including the UAB Department of Music.

“One of the things I found was that, as I became more proficient as a pianist, I would discover new possibilities as a composer,” Mobley said. “The pieces that I wrote at the beginning of my studies are drastically different than those I wrote at the end.”

Mobley is president of the Birmingham Art Music Alliance, an organization dedicated to promoting Alabama composers and presenting concerts featuring works from these composers.

Originally from Virginia, Mobley has lived in Alabama since he was 8 and attended Thompson High School in Alabaster. He has three brothers, all of whom are part of the UAB family: Sam is a UAB alumnus, and Brian and Darius currently attend UAB.