by Shannon Thomason
“Godspell,” Shakespeare’s “Much Ado About Nothing,” “Noises Off,” an original play by a Theatre UAB alumna, and “The SpongeBob Musical” are set for the 2021-22 season.

Per longstanding UAB protocol, members of the media must first receive approval from and/or be escorted by UAB University Relations to be on UAB property, including inside UAB buildings and outdoor campus property (e.g., Campus Green, parking decks).

This fall, Theatre UAB will recognize its 50th anniversary of presenting performances. Its first plays, “No Exit” and “Lysistrata,” were presented in 1970-71.

Theatre UAB is the performance company of the College of Arts and Sciences’ Department of Theatre at the University of Alabama at Birmingham.

Tickets go on sale Sept. 15. To purchase tickets, call the Alys Stephens Center Box Office at 205-975-2787. Performances will take place even for a limited audience, unless otherwise mandated.

Safety is UAB’s priority. The pandemic is a fluid situation that UAB is monitoring, in consultation with infectious disease and public health experts; performances will be subject to change based on the latest COVID-19 safety guidelines.

Visit the UAB Department of Theatre online at www.uab.edu/cas/theatre, or call the department at 205-934-3236. 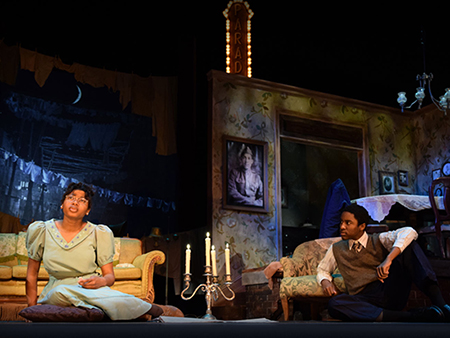 Celebrate community and inclusion in this masterful retelling of the original sensation, injected with contemporary references and dazzling new arrangements.

Theatre UAB presents “Much Ado About Nothing”

One of William Shakespeare’s most delightful and most often produced comedies. Through a hilarious blend of eavesdropping, deception and mistaken identity, a love-struck couple play Cupid for two of their relationship-challenged friends.

Called “the funniest farce ever written,” “Noises Off” presents a manic menagerie of itinerant actors rehearsing a flop called “Nothing’s On.” Doors slamming, on- and offstage intrigue, and an errant herring all figure in the plot of this hilarious and classically comic play.

Hidden deep in a cave among the mountains of Appalachia, this haunting reimagining of the archaic myth of Echo and Narcissus is the story of a woman resurrecting herself after an abusive relationship leaves her cursed and scattered in the dark. This original play is written by UAB Theatre alumna Rebecca Jones in collaboration with Professor Karla Koskinen and UAB student playwright Brett Everingham.

Adapted from the iconic Nickelodeon series, SpongeBob, Patrick, Sandy, Squidward and all of Bikini Bottom face total annihilation — until a most unexpected hero rises to take center stage.