See “The SpongeBob Musical” by Theatre UAB from April 13-17

by Shannon Thomason
When the Mount Humungous volcano threatens to annihilate the town, the citizens of Bikini Bottom must come together in this zany musical, which makes use of recycled and repurposed props, scenery and costumes. 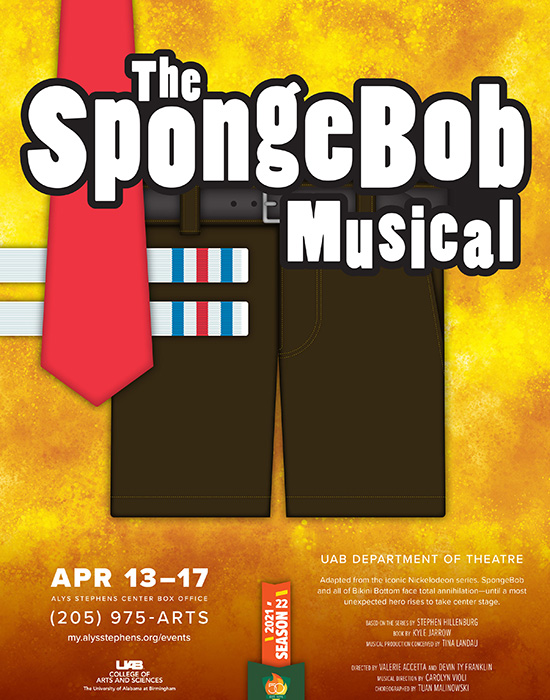 Theatre UAB will present “The SpongeBob Musical,” adapted from the iconic television series, from April 13-17 at the University of Alabama at Birmingham.

“The SpongeBob Musical” tells the story of SpongeBob, Patrick Star, Sandy Cheeks and all the citizens of Bikini Bottom as they face imminent disaster. When the volcano of Mount Humungous threatens to annihilate the town, the friends must come together to face what may be their final moments — when a most unexpected hero rises to take center stage.

Theatre UAB is the performance company of the College of Arts and Sciences’ Department of Theatre.

With a score by writers including Yolanda Adams, Steven Tyler, Sara Bareilles, John Legend and more, and a book by Kyle Jarrow, the play is based on the series by Stephen Hillenburg, with musical production conceived by Tina Landau.

Theatre UAB chose this show not only because it was crafted by an incredible and diverse group of writers, but also “because in these challenging times, we wanted to offer our student performers and our audiences a chance to laugh while being transported to a zany and creative world,” said director Valerie Accetta.

“What has surprised all of us in this process is how much heart there is in the show and how it inspires us to come together instead of splinter apart,” Accetta said. There are themes of government inaction, distrust in science and racism; but there are also singing sardines, a dish sponge on a mission and a tap-dancing squid.

As they tell this story of community, Accetta says, Theatre UAB wants to be mindful of our own imminent disaster: climate change.

“In that spirit, our designers have partnered with UAB Recycling and Sustainability to use recycled objects in some of the scenic elements, have repurposed pieces from previous shows for our props design, and have been inspired by Vivienne Westwood and her passion for sustainability in the costume design,” Accetta said.

Interested in a career in theater? Use UAB’s Find your degree portal to learn more about degrees in the arts.

The performance company has also partnered with Freshwater Land Trust, who discussed their mission of preserving the lands and waters of central Alabama on a guided hike before they started rehearsals for the show. These discussions “continue to inspire us throughout the process as we grow in our community and work together to tell this story,” Accetta said.

Student director Devin Franklin of Hueytown, Alabama, says the show’s timeliness is eerie: A community exploited, mislead and misinformed struggles to find belonging and meaning while facing a world-ending crisis.

“It should not take impending doom for us to be compassionate and supportive of one another,” Franklin said. “These old systems don’t work anymore. SpongeBob’s outlook encourages us to use our imaginations to build a new and more caring world.”

About the cast and crew