by Shannon Thomason
Known for his warm baritone vocals, Porter’s earthy, cross-pollinated brand of jazz, soul and gospel makes him a gifted singer of standards as well as more contemporary soul. 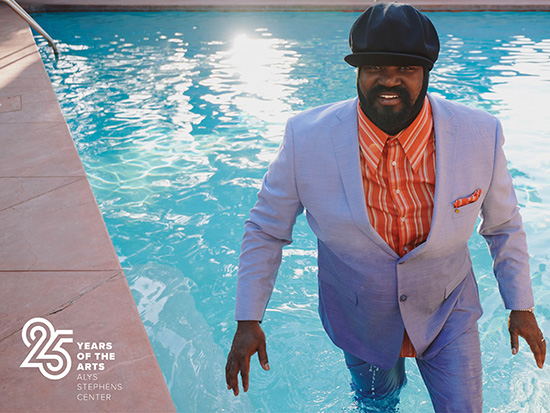 Jazz vocalist Gregory Porter will perform in concert at the University of Alabama at Birmingham on Wednesday, June 22.

Known for his warm baritone vocals, Porter rose to acclaim in the 2010s with his earthy, cross-pollinated brand of jazz, soul and gospel. A gifted singer of standards as well as more contemporary soul material, Porter has earned favorable comparisons to his idols Nat King Cole, Donny Hathaway and Stevie Wonder, according to his artist biography.

Porter earned a Grammy nod for Best Jazz Vocal Album for his 2010 debut, “Water.” Two years later, his second album, “Be Good,” further showcased Porter’s growing confidence. After signing to Blue Note, he gained even more acclaim with his third album, 2013’s “Liquid Spirit” — which hit No. 2 on the jazz charts and won the Grammy for Best Jazz Vocal Album. It also became one of the most streamed jazz albums of all time, with more than 20 million streams. “Take Me to the Alley,” released in early 2016, featured Porter’s own version of “Holding On,” a track he co-wrote and previously recorded with electronic act Disclosure. He also delivered the concert album “Live in Berlin.”

The following year, Porter released a tribute to the artist most influential on his own music. “Nat King Cole & Me” featured his own versions of Cole’s most treasured classics, including “Smile” and “Mona Lisa.” His concert album “One Night Only: Live at the Royal Albert Hall” arrived in 2018.