by Shannon Thomason
Award-winning artist John Fields has been named director of the UAB Visual Arts Gallery and is busy scheduling exhibitions for 2012. 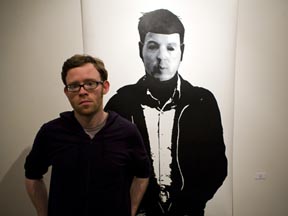 The UAB Visual Arts Gallery is now under the management of Interim Director John Fields, adjunct instructor in the UAB Department of Art and Art History. Fields’ first show will be an exhibition of kinetic sculpture works by UAB Associate Professor John Powers, opening Jan. 9. 2012.

A UAB Honors Program alumnus, Fields received his bachelor’s degree in art studio from UAB in 2003 and his master’s degree in painting from the University of New Orleans in 2007. An award-winning artist, Fields’ work has been exhibited nationally and internationally while also appearing in many publications. His most recent exhibition, “Dear Chuck” at beta pictoris gallery, received both critical and commercial success, becoming the first “sold-out” exhibition for the gallery. Fields has curated and organized numerous exhibitions locally and regionally. Fields received an Ellen Takahashi Award for Painting in 2003, Magic City Art Connection’s Best in Show for 2006, the Artvoices magazine Emerging Artist Award in 2007, a Luis Comfort Tiffany Award Nomination in 2007 and a Catherine Doctorow Prize for Contemporary Painting Nomination in 2011.

In 2012 the gallery’s hours of operation will change slightly. The gallery will continue to be open to the public Monday-Friday, 9 a.m.-6 p.m. and also will open on Saturdays from 9 a.m.-4 p.m. The gallery is closed on Sundays and holidays.