Two new works by UAB University Professor of Music Henry Panion III, Ph.D., will be among the first in a series of efforts in 2013 to commemorate the seminal events of the 50th anniversary of the U.S. Civil Rights Movement in Birmingham. 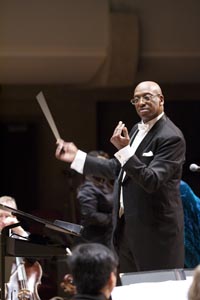 As an institution committed to service, excellence, diversity and community involvement, UAB is a proud partner with the City of Birmingham in 50 Years Forward, the ongoing commemoration. Panion has been commissioned by the Alabama Symphony Orchestra (ASO) to compose the works for “Reflect & Rejoice,” the ASO’s annual tribute to Martin Luther King Jr., scheduled for 3 p.m. Sunday, Jan. 20, 2013, at UAB’s Alys Stephens Center, a cultural center that unites UAB and the Birmingham community.

“The Alabama Symphony is honored and delighted to commission two new pieces from Dr. Henry Panion III, honoring Birmingham’s half-century of the Civil Rights Movement,” said Curt Long, executive director of the ASO. “Henry’s two new pieces — ‘Here We Are’ and ‘Send Me Hope’ — are both deeply personal and speak for Alabamians’ struggle toward equality and justice. These world premieres will be a highlight of our annual ‘Reflect and Rejoice’ concert, in partnership with the Birmingham Civil Rights Institute. The world premieres will also help inaugurate Birmingham’s city-wide year of remembrance for the events of 1963.”

“Here We Are,” composed for a small girls’ ensemble or female lead, with choir and orchestra, is based around the spiritual “Give Me Jesus,” Panion said. It opens with a brief, celebratory gospel feel, “reflective of what was the probable scene of the church service the Sunday morning the Sixteenth Street Baptist Church was bombed,” he said. The church was bombed Sept. 15, 1963 at 10:22 a.m.

The work quickly transitions into a scene of restlessness, tension and abrupt chaos, “reflective of the probable suspense just before the bomb goes off and the sporadic questions of ‘where are the girls,’ which is announced by the different sections of the choir,” Panion said. The work then moves into a response by the girls’ ensemble, representing the four little girls that were killed on that day. The adult choir will sing another line from this spiritual as the orchestra builds, and the work ends with the girls entering the stage for one more appearance with the choir and orchestra and concludes softly.

“Send Me Hope” is written in a popular gospel style and features the rich contralto voice of rising gospel artist Maquita Anthony, who co-wrote the song with Panion, Clinton Green and Marc Raby. Backed by the Aeolians of Oakwood College, Panion said he arranged and orchestrated this work to serve as a bookend of sorts with “Here We Are.”

The premiere will feature the Aeolians of Oakwood College in Huntsville, the Alabama Symphony Orchestra and a small girls’ choir from Sixteenth Street Baptist Church youth choir, Panion says.