by Shannon Thomason
Shankar will perform songs from her latest CD, “Traces of You,” accompanied by her band. They will also conduct a free ArtPlay workshop.

The University of Alabama at Birmingham’s Alys Stephens Performing Arts Center will present Anoushka Shankar live on Thursday, Nov. 7, as part of her “Traces of You” tour. 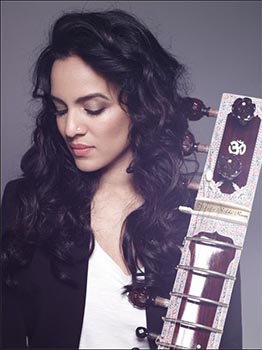 Anoushka ShankarShankar, a sitar player and composer, is deeply rooted in Indian classical music, having studied exclusively with her legendary father, Ravi Shankar, since age 9. As a composer, she is thriving while exploring fertile ground in the crossover between Indian music and other genres; but the ancient Indian classical form she was handed down from her father is always the central current running through her work. She and her father performed together to an ecstatic, sold-out audience at the ASC in 2007.

On “Traces of You,” her seventh CD, which was released internationally on Oct. 4, Shankar draws creatively from her relationships and multicultural lifestyle to trace a journey of love, change and loss. The album was inspired by the idea that everything in the universe leaves an indelible mark or a subtle “trace” on everything else with which it comes into contact. Having lost her father during the process of making the album, her loss is undeniable, yet the music is ultimately hopeful, since it is also born from her deep love for her husband and young son.

Joining her in the performance will be Pirashanna Thevarajah, Indian percussion; Manu Delago, percussion and Hang; Tanya Wells, vocals and tanpura; Danny Keane, cello and keyboards; and Sanjeev Shankar, shehnai and tanpura.

ArtPlay, the ASC’s home for education and outreach, will present a clinic earlier in the day at 1 p.m. featuring a performance and demonstrations of Indian instruments, scales and rhythms by Shankar and members of her band. For more information on the clinic, call 205-975-4769.

The ASC, inspired by Birmingham’s locally based international artists and touring artists who are based internationally, also will present Global Fest, a free celebration of world cultures happening that week. The hourlong events, all held at noon in the ASC, include “The Jig Is Up! The Masterful Artistry of Irish Dance” on Wednesday, Nov. 6; “The Art of Indian Dances” Thursday, Nov. 7; and “Un Voyage Aux Frances” on Friday, Nov. 8. Everyone is invited. For more details, visit www.AlysStephens.org.