by Shannon Thomason
With backgrounds in modern jazz, new music and bluegrass, Julian Lage and Chris Eldridge explore the worlds of improvisation and composition. 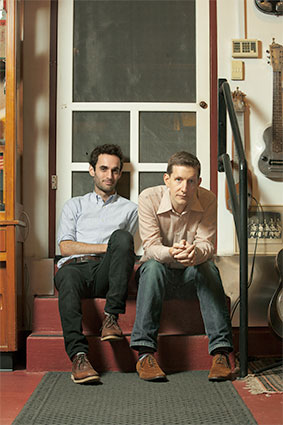 The Lage/Eldridge duo is a collaborative effort founded in acoustic music’s roots. Together they explore the worlds of improvisation and composition. Lage’s background is in modern jazz and new music. Eldridge’s relationship is with bluegrass, and he is a member of the widely acclaimed band Punch Brothers. Their talents combined mean this duo lives at the nexus of improvisation, spontaneous composition and virtuosic refinement, all performed on their respective 1939 Martin guitars.

Lage began playing guitar at an early age, and by the time he was 8 was playing with Carlos Santana. At 11, he began performing and collaborating with Gary Burton. In 2009, Lage released his debut album, “Sounding Point,” with the help of musicians such as Bela Fleck and Nickel Creek’s Chris Thile. “Sounding Point” was nominated for the 2010 Grammy Award for Best Contemporary Jazz Album. Eldridge has been at the vanguard of acoustic music for much of the past decade. In 2005 he caught the attention of Thile, who enlisted him, along with banjoist Noam Pikelny, violinist Gabe Witcher and bassist Greg Garrison, to start working on an ambitious side project. Soon after they decided to focus all of their collective energies into one band, and Punch Brothers was born. That band has since released three critically acclaimed albums, received two Grammy nominations and toured the world.