by Shannon Thomason
Enjoy an evening of global guitar as Sérgio and Odair Assad perform their style of classical, jazz and Latin musical fusion. 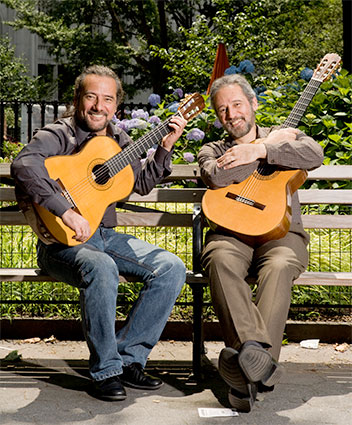 The Assad Brothers have created a new standard of guitar innovation, ingenuity and expression, setting the benchmark for all other guitarists. The prolific duo is playing a major role in creating and introducing new music for two guitars. The Washington Post declares they are “the best two-guitar team in existence, maybe even in history … no amount of anticipation could have prepared me for the Brazilian brothers’ daringly flexible, eerily unanimous ensemble playing.”

The Assads began playing the guitar together at an early age. Their talents come from a family rich in Brazilian musical tradition, as well as from their studies with guitarist/lutenist Monina Távora (1921-2011), a disciple of Andrés Segovia. Their international career began with a major prize at the 1979 Young Artists Competition in Bratislava.

In 2001, their album “Sérgio and Odair Assad Play Piazzolla” won a Latin Grammy; in 2007, their album “Jardim Abandonado,” named after a piece by Antonio Carlos Jobim, was nominated for Best Classical Album, and Sérgio Assad went on to win the Latin Grammy for his composition “Tahhiyya Li Oussilina.”

The brothers have worked extensively with renowned artists such as Nadja Salerno-Sonnenberg, Fernando Suarez Paz, Paquito D’Rivera, Gidon Kremer and Dawn Upshaw and have an ongoing, highly acclaimed collaboration with cellist Yo-Yo Ma. In 2009, the brothers were featured on Ma’s chart-topping release “Songs of Joy & Peace.”

Their virtuosity has inspired a wide range of composers to write for them, including Astor Piazzolla, Terry Riley, Radamés Gnattali, Marlos Nobre, Nikita Koshkin, Roland Dyens, Jorge Morel, Edino Krieger and Francisco Mignone. Now Sérgio Assad is adding to their repertoire by composing music for the duo and for various musical partners both with symphony orchestra and in recitals. Odair Assad is based in Brussels, where he teaches at Ecole Supérieure des Arts. Sérgio Assad resides in San Francisco, where he is on the faculty of the San Francisco Conservatory of Music.

ArtPlay will present a Meet the Artist school show featuring The Assad Brothers for hundreds of area students, earlier in the day at 10 a.m. in the ASC.