by Shannon Thomason
The Viva Health Starlight Gala benefits the programs and education initiatives of UAB’s Alys Stephens Center. Tickets are $125 and include a reception; VIP dinner packages also are available. 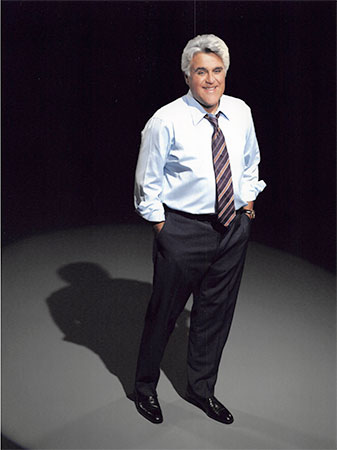 Comedian and television host Jay Leno is the star of the 2015 Viva Health Starlight Gala, the biggest fundraiser of the year for the University of Alabama at Birmingham’s Alys Stephens Performing Arts Center.

Leno’s late-night television ratings domination included more than two decades of “The Tonight Show with Jay Leno,” winning every consecutive quarter of his hosting for 19 years. According to his bio, he has been honored by the Television Academy with an Emmy for Outstanding Comedy, Variety or Music Series, and “The Tonight Show with Jay Leno” has taken home the trophy for Favorite Late Night Show in the annual TV Guide Awards, which is determined by voting viewers. He recently was installed in the Television Academy’s Broadcast Hall of Fame.

Leno also has succeeded in the newest entertainment arena: “Jay Leno’s Garage,” of which he is a producer as well as star. The NBC creation, viewed at jaylenosgarage.com, has gained an international following online, not to mention an Emmy Award and two additional nominations for Outstanding Special Class–Short-Format Nonfiction Programs. Leno has received the People’s Choice Award and other honors, including the Harris Poll selection as most popular star on television. Personal highlights include his induction into the Academy of Television Arts and Sciences’ Broadcasting Hall of Fame, his upcoming reception of the John F. Kennedy Center for the Performing Arts’ Mark Twain Prize for American Humor, the Hasty Pudding Award at Harvard University, an honor whose sole prior comedy/talk host recipient was Johnny Carson, and an honorary doctorate from his alma mater, Emerson College. Like Carson, Groucho Marx and an elite group of entertainment figures, he has been invited to have his papers installed in the Library of Congress.

Leno loves to test his humor live on audiences across the nation, often performing more than 100 live appearances in nightclubs, theaters and stadiums each year. Touted as one of the nicest people in show business, he is also indefatigable — fitting for the man who says, “Anyone can have a life; careers are hard to come by!”

According to his bio, in addition to the United States, he has entertained in various countries, including Bosnia, where he performed for military troops associated with the war in Afghanistan, and Aviano, Italy, where he performed for troops associated with the peacekeeping efforts in Bosnia. He remains passionate about performing in front of live audiences, including the military, and appears regularly in Las Vegas, on U.S. college campuses and in other venues.

Leno uses his talents to help those less fortunate. Each year he serves as master of ceremonies and does numerous benefit performances, including shows for those whose lives were devastated by the 9/11 tragedy, the tsunami in Thailand, hurricanes on the Gulf Coast, and the severe economic downturn in Detroit. He leads the annual Love Ride in California to benefit humanitarian organizations serving people with autism and muscular dystrophy and for the Special Olympics, among many others.