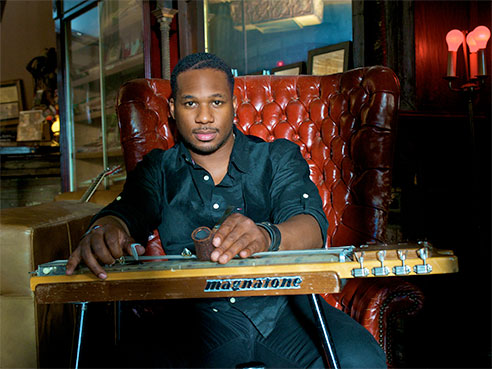 Pedal steel guitarist Randolph’s prowess on guitar earned him a spot on Rolling Stone magazine’s “100 Greatest Guitarists of All Time” list. It also attracted the attention of such guitar giants as Eric Clapton and Carlos Santana, who have collaborated with him on stage and in the studio. The band has turned out impressive albums but is best known for its famed live performances, having notched unforgettable sets at Bonnaroo, Austin City Limits, and the New Orleans Jazz and Heritage Festival.

They have rocked some of the biggest stages in the business, and now RR&TFB will bring its good-time funk and brilliant pedal steel guitar-playing to the ASC. Audience participation is a big part of the band’s show, with listeners urged to dance and sing along to the music. Rolling Stone called the group “one of the most intense live acts in all of jamdom,” making its first appearance at the ASC one that should not be missed.

Randolph’s Family Band is his literal family band: drummer Marcus Randolph, Danyel Morgan on bass and vocalist Lanesha Randolph, along with guitarist Brett Haas. Their latest album, “Lickety Split,” is the first in three years and returns to the band’s roots. Randolph was trained as a pedal steel guitarist in the House of God Church, and was discovered while playing at a convention in Florida. Until his teen years, he listened only to religious music and had not heard music by popular rock and soul bands. The late, great Stevie Ray Vaughan inspires his style and technique.

“Robert Randolph is an American original,” said Blue Note Records President Don Was of the musician. “He has mastered what is arguably the most complex instrument in the world and developed a unique voice that is equal parts street-corner church and Bonnaroo.”