by Shannon Thomason
Artist Enrique Martínez Celaya creates works concerned with the complexity of human experience that reflect on questions of ethics and authenticity and allude to memory, loss, exile, love and longing. 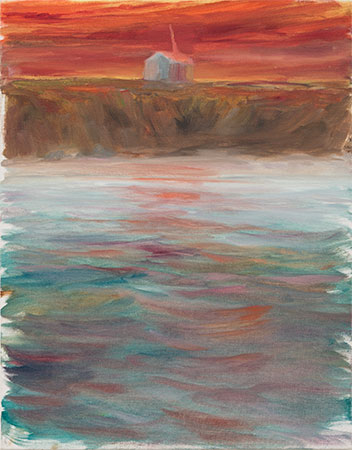 The exhibition surveys the works of one of the most enigmatic artists of our time, through a focus on his intimately scaled paintings, Tamiris Becker says. The exhibition will feature more than 45 small paintings, tracing both chronological developments and many of the artist’s long-abiding themes, while also revealing his evolving approach to composition and technique over four decades.

In addition to the two galleries of small paintings, the exhibition will also feature a gallery of five large-scale paintings, providing further insight into the profound body of work and offering additional context to understand the significance of these small works.

Martínez Celaya was born in Palos, Cuba, in 1964. The exhibition includes rarely seen early works from the 1970s produced by the artist as a young boy and teenager, after he and his family left Cuba for Spain in 1972. Martínez Celaya moved to Puerto Rico in 1975, where he began his formal art training at the age of 12 as an apprentice to an academic painter. The exhibition also includes works produced in the 1980s while Martínez Celaya was studying laser physics and quantum mechanics, prior to his decision to fully commit his life’s work to art; he later enrolled in the Master of Fine Arts program at the University of California, Santa Barbara, where he received his degree in 1994 with highest honors. The exhibition continues with works from the 1990s, during which time his career in Los Angeles grew nationally and internationally, and his subsequent prolific artistic production from 2000 through 2015, including works from projects such as “All the Field is Ours” and “The October Cycle” to more recent projects such as “The Nomad,” “The Pearl” and “Lone Star,” including selections from his most recent 2015 exhibition, “Empires: Land” and “Empires: Sea.” 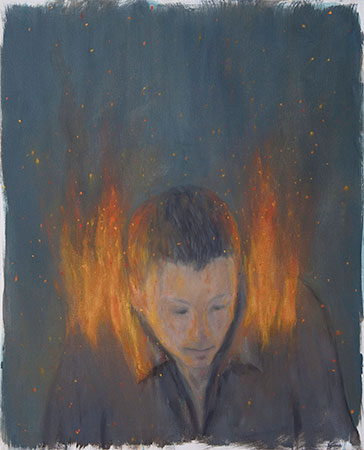 Enrique Martínez Celaya The Fourth Angel, 2010 Oil and wax on canvas 30 x 24 inches Private Collection, Ocean Ridge, FLThe exhibition reveals many of the artist’s major poetic and painterly concerns through the intimacy of the small painting format, including his engagement with topics such as memory, loss, exile, coming-of-age, birth, love, longing, the temporal, the horizon, nature and ambiguity, alchemical transformations, and the discovery of guides amid an often paradoxical and uncertain reality, Tamiris Becker says. Martínez Celaya’s work is also concerned with questions of ethics, authenticity and reflections on human failure as well as human accomplishment, with his work seeking to function as a method and means of identifying and breaking through illusory realities amid the enigmatic circumstances he, and by extension, his audience, might be facing.

Titles such as “The Other Life,” “The Instructor on the Limits of Sorrow,” “The One I Forgot,” “The Great Voice,” “The Redeemer” and “The Merciful Doctrine” reveal the emotional resonance and poetic nature of these intimate works.

Martínez Celaya has throughout his career consistently produced small paintings alongside his larger works of sculpture, painting and installation projects. Far from serving simply as studies or preliminary sketches for his larger works, they possess a particular integrity and function within the larger scope of the artist’s work. Moreover, Martínez Celaya has observed their difficult and challenging nature. This survey of small paintings explores their difficulty, distinctive subject matter and significance in the broader context of the artist’s artistic practice.

The exhibition also foregrounds the artist’s desire to push the limits of the medium of painting in the pursuit of aesthetic and poetic effect and meaning. This includes his use of materials such as fabric, mirrors, feathers, tar and wax, often combined with more traditional substances such as oil paint. The artist’s engagement with intellectual and literary history is also traced through his numerous painterly evocations and homages to poets, writers and philosophers of particular import to his thinking and practice. Included in the exhibition are small paintings that pay homage to literary figures such as the Russian poets Osip Mandelstam and Marina Tsvetaeva, and the American writer Herman Melville, among others. 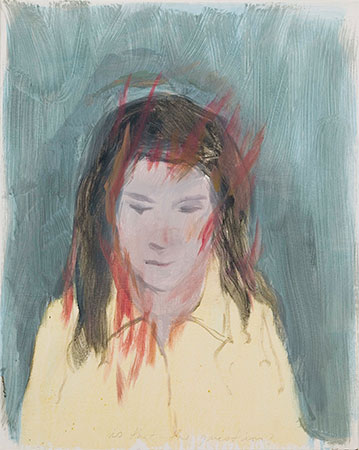 Enrique Martínez Celaya The Reedemer, 2009 Oil and wax on canvas 30 x 24 inches Private collection, London, United KingdomIn his essay “Systems, Time, and Daybreak” Martínez Celaya writes: “All artists should aspire to be prophets – minor prophets, for the most part, but that will do …. What we need in art is ambition of spirit, quality, and authenticity, not because those imperatives are abundant in our lives but precisely because they are not.”

Martínez Celaya’s work has been widely exhibited and collected internationally and is included in the permanent collections of the Metropolitan Museum of Art and the Whitney Museum of American Art in New York; the Los Angeles County Museum of Art; the State Hermitage Museum in St. Petersburg, Russia; the Moderna Museet in Stockholm, Sweden; and the Museum der bildenden Künste in Leipzig, among others. Recent major solo exhibitions include “Burning as It Were a Lamp” at the Hood Art Museum, Dartmouth College, in 2014; “The Pearl” at SITE Santa Fe in 2013; “The Tower of Snow” at The State Hermitage Museum, St. Petersburg, Russia, in 2012; and “Schneebett” at the Pérez Art Museum Miami in 2011; as well as gallery exhibitions at venues including LA Louver in Los Angeles, Jack Shainman Gallery in New York and Parafin, London.

Martínez Celaya is the author of eight books, which often combine poetry and texts with visual elements, including most recently “On Art and Mindfulness: Notes from Anderson Ranch,” published by Whale & Star Press in collaboration with the Anderson Ranch Arts Center in 2015; “Collected Writings and Interviews” 1990-2010 and “The Nebraska Lectures,” both published by the University of Nebraska Press in 2010; “The Blog: Bad Time for Poetry,” published by Whale & Star Press in 2009; and “October,” published by Cinubia in 2001, among others. He was a tenured professor at Pomona College and the Claremont Graduate University, where he taught from 1994-2003 and was honored as a Presidential Professor of the University of Nebraska, a title he held from 2007-2010. Martínez Celaya is the founder of Whale & Star Press, which publishes books on art, poetry, critical theory and art practice. He is a trustee of the Anderson Ranch Arts Center and is also a Montgomery Fellow at Dartmouth College.

Martínez Celaya lives and works in Los Angeles, California. A detailed biography and more information are available on the artist’s website, www.martinezcelaya.com.