Community sewing days at UAB began Jan. 22 at ArtPlay and will continue Jan. 29 and Feb. 27 with the UAB Department of Art and Art History at AEIVA.

The March Quilts project is back in 2016 with a new human rights theme, focusing on gender pay equity.

This year, the University of Alabama at Birmingham College of Arts and Sciences’ Department of Art and Art History and ArtPlay, the Alys Stephens Performing Arts Center’s home for art education, will partner once again with project founders Bib & Tucker Sew-Op along with community members from across the city. DAAH student Lisa Nguyen of Birmingham designed this year’s March Quilts logo.

A series of community sewing days, some with special guests, are scheduled through the winter and spring, starting with a sewing day from 5:30-8:30 p.m. on Friday, Jan. 22, at UAB’s ArtPlay, 1006 19th St. South. The sewing session will include UAB Arts in Medicine storyteller Elizabeth Vander Kamp and her presentation “Earth, Sea & Sky: Designing Women of the Past” at 6:30 p.m.

The project began in 2015 when Bib & Tucker Sew-Op partnered with the Department of Art and Art History and the Birmingham Museum of Art. Their goal was to commemorate the 50th anniversary of the Selma to Montgomery marches through open sewing sessions that ultimately yielded 461 quilt blocks created by the community. Sew-Op members stitched the blocks together and made three quilts, which hung at the Selma Public Library and the Alabama Department of Archives in Montgomery during the anniversary. 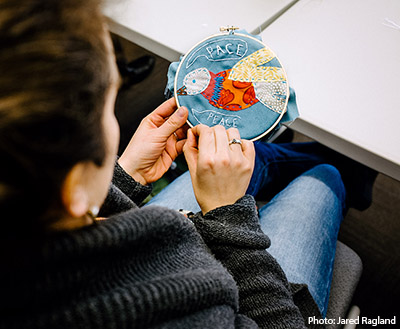 Due to the strong response to the project, collaborators agreed that it should become an annual project. Each year, a relevant civil or human rights theme will be chosen, and Bib & Tucker members will facilitate open sewing sessions and discussion surrounding the topic. Community members will have a chance to create a block that expresses a personal experience with the theme. Bib & Tucker members will stitch the blocks into one magnificent quilt that will be exhibited in March in tandem with a relevant anniversary or day of recognition. This quilt, once completed, will hang in the American Gallery at the Birmingham Museum of Art at the end of 2016.

This year, project collaborators chose pay equity as the second annual March Quilts theme, says Bib & Tucker director Lillis Taylor. Simply put, women today are paid less than men. On average, a Caucasian woman makes approximately 78 cents for every dollar paid to her male counterpart. The gap is even worse for women of color: African-American women earn approximately 64 cents and Latina women earn only 55 cents for each dollar earned by Caucasian males. Despite President John Kennedy’s Equal Pay Act of 1963 and President Barack Obama’s Lilly Ledbetter Fair Pay Act of 2009, equality in the U.S. workforce continues to be unattainable. Because this issue remains contentious, project collaborators want to create dialogue among community members in the hope of shedding light on other aspects of the fight for equality, such as the Equal Rights Amendment.

For more information and a full schedule of open sewing sessions, visit www.bibandtuckersewop.org/the-march-quilts.html.