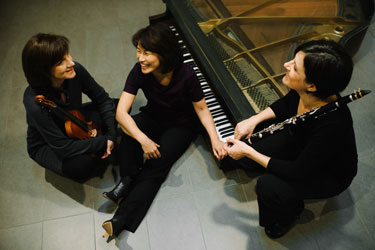 QThree, a female chamber group best known for presenting new works in diverse settings, is set to perform at the University of Alabama at Birmingham on Thursday, Jan. 28.

The College of Arts and Sciences’ Department of Music presents the recital. The free performance is set for 7:30 p.m. in UAB’s Mary Culp Hulsey Recital Hall, 950 13th St. South. Contact the UAB Department of Music at 205-934-7376 or visit  www.uab.edu/cas/music.

On the program for their UAB performance is “The End of Summer” by Ned Rorem; “I Gave My Love a Cherry” from “Come Down Heavy” and “Thorn and Flare” by Evan K. Chambers; and “Rain Waves” for violin, clarinet and piano by Joan Tower.

For more than a decade, the three women performed as members of the celebrated new music ensemble, Quorum, with whom they commissioned, premiered and recorded works for unusual combinations of instruments including violin, saxophone, clarinet, bassoon, percussion and piano. Since that time, each has joined forces for a variety of other projects. As members of the Haven Trio, Koga and Luevano regularly collaborate with soprano Lindsay Kesselman. Stuart and Luevano joined Koga on her CD with mezzo-soprano Patricia Green titled “Ice Age and Beyond: Works by Canadian Women Composers,” performing in the premiere recording of Kati Agocs’ song cycle “Imagination of Their Hearts.” Koga, Luevano and Stuart joyfully reunited for their 2015 QThree debut trio concert at the University of South Florida and University of Tampa.