BASETRACK Live: true stories of Marines who served in Afghanistan, Nov. 13 at UAB

by Shannon Thomason
The Alys Stephens Center show provides an intimate portrait of military families both during deployment and after. Noah Galloway, Dr. Richard E. Powers, Susan Robinson and Matt Bein will discuss the challenges of military service in a post-show panel.

Be immersed in the impact of war on veterans and their families through true stories of Marines who served in Afghanistan in BASETRACK Live, called “an exhilarating evening of documentary theater” by The New York Times and named one of its Top Ten shows of 2014.

Presented by the University of Alabama at Birmingham’s Alys Stephens Performing Arts Center, the one-night-only performance is set for 7 p.m. Sunday, Nov. 13. Protective, the JDM Foundation and the Alabama State Council on the Arts make this show possible.

Tickets are $28, or $14 with a military ID. Call 205-975-2787 or visit www.AlysStephens.org for tickets or for more information. UAB students and faculty may purchase $25 tickets; a limited number of $25 tickets are available. All UAB students, faculty and staff may receive a 20 percent discount on single tickets for all shows, excluding the gala. 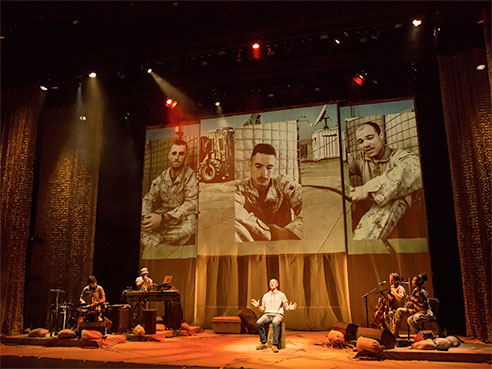 Combining live performance, immersive projection design and a dynamic electro-acoustic score, the show provides an intimate portrait of military families both during deployment and after.After the performance, the Alys Stephens Center will host a panel discussion on the production and the challenges associated with military service. On the panel are Noah Galloway, former United States Army soldier who was injured in the Iraq war, motivational speaker and author of “Living With No Excuses: The Remarkable Rebirth of an American Soldier”; psychiatrist Dr. Richard E. Powers; Susan Robinson, coordinator for Lima Foxtrot at Lakeshore Foundation, one of the country’s most comprehensive, year-round sport, recreation and fitness programs for severely injured members of the U.S. Armed Forces injured post-9/11; and Matt Bein of Birmingham, an eight-year Marine serviceman who was injured in Iraq and now devotes himself full time to assisting veterans.

Two actors portray the real-life characters of AJ and Melissa Czubai, a young Marine and his wife. The audience follows their journey through his deployment to Afghanistan and back home again, the birth of their child while he is overseas, and his injury that sends him home. Photographs and videos shot by embedded journalists bring to light the stories of other Marines with whom AJ served in Unit 1/8, their feelings about deploying, and their hopes and dreams for coming home.

“It would be enough if BASETRACK simply gave us a viscerally powerful depiction of war and its aftermath, if it only captured the sly humor of Marines, the pride of the infantry and the psychological disorientation of homecoming,” Klay said. “But it also provides an intimate portrait of military families both during deployment and after, sharing their stories with warmth, humor and raw honesty. Superb, moving work.”

BASETRACK has been seen in more than 25 cities across the country. The production is highly praised by both veteran and civilian audiences for sharing stories of modern military service. It was created by Ed Bilous, director of the Center for Innovation in the Arts at The Juilliard School, with interviews adapted by Jason Grote, Seth Bockley and Anne Hamburger, with music composed by Bilous and Michelle DiBucci. Veterans, service personnel and their families are invited to contact BASETRACK Live are invited to contact BASETRACK Live about discounted tickets to the show, special events and opportunities to share experiences.