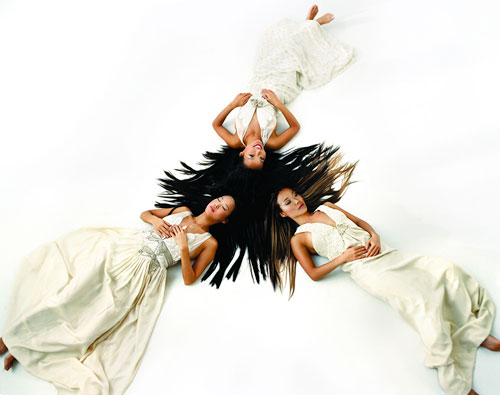 The three sisters of the Ahn Trio — Lucia on the piano, Angella on the violin and Maria on the cello.The Ahn Trio, hailed as “exacting and exciting musicians” by the Los Angeles Times, will perform Sunday, March 5, as part of the Salon Series presented by the University of Alabama at Birmingham’s Alys Stephens Performing Arts Center.

The three sisters of the Ahn Trio — Lucia on the piano, Angella on the violin and Maria on the cello — have earned a distinguished reputation for embracing 21st century classical music with unique style and innovative collaborations. Maria, Lucia and Angella thrive on dissolving the barriers between art forms. They have fused their work with a range of artists and musical genres, from dancers and lighting designers to DJs. The Seattle Times proclaimed, “The Ahn Trio give chamber music a new sound.”

UAB students and faculty may purchase $25 tickets; a limited number of $25 tickets are available for each show. All UAB students, faculty and staff may receive a 20 percent discount on single tickets. For tickets, call 205-975-2787 or visit www.AlysStephens.org.

The program will feature selections from the group’s new album, including “Skylife” by David Balakrishnan/Kenji Bunch; “Lullaby for Leo” by Hyung-ki Joo; “Nina-Nane (lullaby)" by Nguyên Lê; “Yu Ryung” by Pat Metheny; “Sarabande” and “Backstep” by Kenji Bunch; “Little Wing” by Jimi Hendrix/D.D. Jackson; “Insensatez” by Antônio Carlos Jobim/Vinícius de Moraes/André Mehmari; “Só Louco” by Dorival Caymmi/Tiago Costa; “Space Oddity” by David Bowie/Bunch; “This is Not America” by Bowie/Metheny/Jurgen Dahmen; and “Purple Rain” by Prince/Bunch. All the pieces are written or arranged for the Ahn Trio. The trio will perform a free Meet the Artist School show for area school children at 10 a.m. March 6.

In 2011, President Barack Obama invited the Ahn Trio to perform at the White House for a state dinner honoring South Korea. The Ahn sisters were born in Seoul, Korea, and educated at the Juilliard School in New York City. Reflecting the two cultures in which they grew up, the trio brings a new energy and excitement to the chamber music world. Luminary composers including Michael Nyman, Maurice Jarre, Pat Metheny, Paul Schoenfield, Mark O’Connor, Kenji Bunch, Nikolai Kapustin and Paul Chihara have written works for them. The trio’s latest CD, “Lullaby for My Favorite Insomniac,” is a showcase of their fearless creativity; it reached No. 8 on the Billboard Charts for 26 weeks in the Classical Album category.

In two decades of touring, the trio has performed in all 50 states and in more than 30 countries, and recorded six albums. The first, a recording of Ravel and Villa-Lobos trios, brought rave reviews, with Audio Magazine praising “this is one of Ravel’s best and never better played.” The next EMI recording of trios by Dvorak, Suk and Shostakovich won Germany’s prestigious ECHO Award.

The sisters made a joint album, “Smetana,” with the Czech Grammy-winning rock group Tata Bojs. More recently, they performed with the Tata Bojs in the Czech Republic to sold-out shows.

The sisters enjoyed a successful collaboration with the David Parsons Dance Company, touring extensively to critical acclaim. The trio is thrilled to add “March of the Gypsy Fiddler,” a triple concerto written for them by Mark O’Connor, to their repertoire.

The Ahns frequently enjoy having guest artists join them on stage. Recent favorites include the Kin, a two-brother rock band from Australia, as well as electronic music artist Juno, aka Superdrive, from Berlin. It is precisely this vitality and commitment to innovation that has the Ahn Trio continually drawing new audiences to classical music.

Dedicated to educating and inspiring the next generation of musicians, the Ahns are passionate about sharing their knowledge. Angella is a professor of violin and viola at Montana State University. Maria teaches cello and is the head of the String Department at the Harlem School of the Arts in New York. Lucia has a growing private studio. They hold master classes and workshops across the United States and around the world and are often resident artists at festivals such as the Laguna Beach Music Festival.