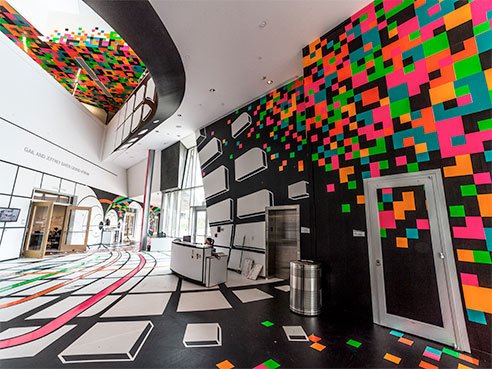 Presented in collaboration by the College of Arts and Sciences’ Department of Music and the Abroms-Engel Institute for the Visual Arts, Chamber Music @ AEIVA offers a reception after work in a relaxing setting with art and music. The reception, held inside the AEIVA, is at 5 p.m., followed by the concert at 5:30 p.m. It is free and open to the public.

The fifth Chamber Music @ AEIVA will feature a concert in conjunction with Angel’s site-specific installation, which covers the entire lobby and atrium. Angel’s installations aim to enable forms of collaboration among sciences, philosophy, music, art and new media. Angel uses a variety of materials, including cut vinyl, paint and wallpaper, to transform architectural interiors by distorting the viewer’s visual perspective. The completed “Facing the Hyperstructure” installation will be unveiled to the public March 31, alongside the 41st annual Juried Student Exhibition.