by Shannon Thomason
One of the country’s foremost pianists, Jeremy Denk has toured frequently with violinist Joshua Bell. This performance is part of the ASC Salon Series, which offers on-stage seating and a postperformance meet-and-greet. 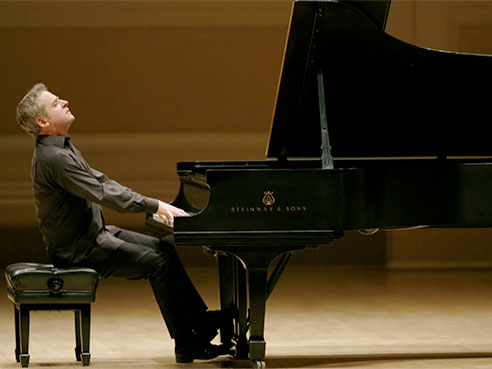 One of the country’s foremost pianists, Jeremy Denk will perform Sunday, April 23, presented by the University of Alabama at Birmingham’s Alys Stephens Performing Arts Center.

Winner of a 2013 MacArthur “Genius” Fellowship, the 2014 Avery Fisher Prize and Musical America’s 2014 Instrumentalist of the Year award, Denk is an artist The New York Times hails as “someone you want to hear no matter what he performs.”

Denk has toured frequently with violinist Joshua Bell, and their recently released Sony Classical album, “French Impressions,” won the 2012 Echo Klassik award. He also collaborates regularly with cellist Steven Isserlis and has appeared at numerous festivals, including the Italian and American Spoleto Festivals, and the Verbier, Ravinia, Tanglewood, Aspen Music and Mostly Mozart Festivals. He has recently appeared as soloist with the Cleveland Orchestra, New York Philharmonic, Los Angeles Philharmonic, Philadelphia Orchestra, and the symphony orchestras of Boston, Chicago, San Francisco and London.

UAB students and faculty may purchase $25 tickets; a limited number of $25 tickets are available for each show. All UAB students, faculty and staff may receive a 20 percent discount on single tickets. For tickets, call 205-975-2787 or visit www.AlysStephens.org.

In 2015, Denk launched a four-season tenure as an artistic partner of the Saint Paul Chamber Orchestra and performed Bach concertos with Academy of St. Martin-in-the-Fields in London, and on tour throughout the United States. Following the release of his disc of the Golberg Variations, which reached No. 1 on Billboard’s Classical Chart, he performed the piece throughout Europe, including for his debut at the Concertgebouw in Amsterdam and at London’s LSO St. Luke’s.

Denk is known for his original and insightful writing on music, which Alex Ross praises for its “arresting sensitivity and wit.” The pianist’s writing has appeared in the New Yorker, the New Republic and The Guardian, and on the front page of the New York Times Book Review. His blog, Think Denk, where he recounts his experiences of touring, performing and practicing, was selected for inclusion in the Library of Congress web archives.