by Shannon Thomason
The true story of astronomer Henrietta Leavitt, who discovered how to measure the universe and changed the field of astronomy. 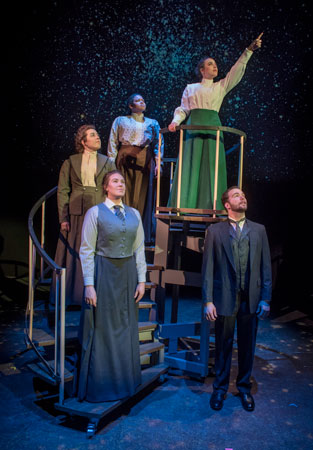 Theatre UAB will present this timely play, about an unconventional woman who rejects the limitations of her Midwestern religious upbringing to explore humankind’s place in the universe. Theatre UAB is the performance company of the University of Alabama at Birmingham College of Arts and Sciences’ Department of Theatre.

The play’s director, Karla Koskinen, says surely one of Gunderson’s main intentions is “to tell these women’s stories, in order to acknowledge female accomplishments that are often neglected in the male-constructed historical record.

“In ‘Silent Sky’ she recognizes Henrietta Leavitt who, against great odds, discovered how to measure the universe, thereby changing the field of astronomy,” Koskinen said. Along with Williamina Fleming and Annie Cannon, she represents unconventional women of the early 20th century who forged their own paths in order to make significant scientific contributions.

“We are telling the story of women who made major contributions to the field of astronomy but are relatively unknown,” Koskinen said. “Like the story of the female mathematicians in ‘Hidden Figures,’ these women’s stories were not told.”

As Henrietta, in her free time, attempts to measure the light and distance of stars, she must also take measure of her life on Earth, trying to balance her dedication to science with family obligations and the possibility of love. Gunderson juxtaposes these female pioneers with Margaret, Henrietta’s sister who is committed to family, religion and art. The play’s themes are the ordinary versus the exceptional, sacred versus scientific, family versus career, the known versus the unknown.

“Through the two sisters, Gunderson demonstrates how both the heart and the head are necessary to live a good life,” Koskinen said.

The style of the production is romantic, magical and vast; the practical set minimal and carefully selected. Theatre UAB collaborated with Assistant Professor of New Media Elizabeth Pellathy in the Department of Art and Art History and two of her students, Millena Oliverira and Courtney Lassiter, to create the projections for “Silent Sky.”