by Shannon Thomason
The Concert Choir was chosen to perform in the 2018 Gotham SINGS! Collegiate Choral Showcase on May 27. 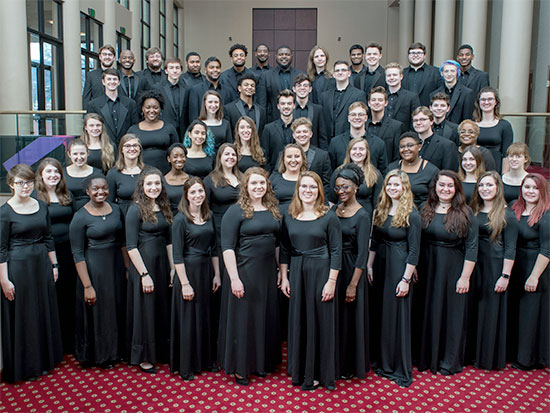 The University of Alabama at Birmingham Concert Choir will make its debut performance at Carnegie Hall in New York on May 27.

The UAB Concert Choir was chosen to perform in the 2018 Gotham SINGS! Collegiate Choral Showcase based on its past successes on international choral performances and through audio recording submission. Sechrist Travel facilitated the invitation.

“We carefully select and invite only top choral programs,” said Sean Berg, Sechrist Travel’s executive director. “These choirs are selected from their stellar reputations on the national level and the unprecedented choral music education opportunities and performances offered at each institution.”

The Concert Choir, under the direction of Brian Kittredge, DMA, is the premier choral ensemble at UAB, in the College of Arts and Sciences’ Department of Music. It features approximately 50 auditioned singers from many disciplines across campus, and while a large percentage of the group are pursuing music studies, there are more than 20 other majors also represented in the ensemble.

The choir will perform additional concerts at high schools in Huntsville and Arlington, Virginia, on the way to New York. Additional performances in the Washington, D.C., area may also be included.

Included on the program are works largely by American composers, such as Mulholland, Elder, Kirschner, Paulus, Gibbs and more. Works by composers such as Nystedt and Tallis will also be performed.

While Carnegie Hall invites thousands of performances every year, it is a rare occasion to be a featured ensemble on a concert series, Kittredge says.

“There is something magical about performing in the hall that can only be witnessed by the experience,” Kittredge said. “As the saying goes, ‘Carnegie Hall: If you haven’t played it, you haven’t made it.’”