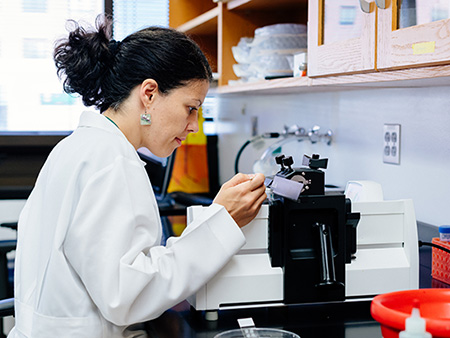 The University of Alabama at Birmingham is one of eight Udall Centers of Excellence in Parkinson’s Disease Research by the National Institutes of Health. The Udall Centers, begun in 1997, are funded by congressional legislation in honor of former U.S. Rep. Morris Udall of Arizona, who died in 1998 after a long battle with the disease.

The Alabama Udall Center is led by David Standaert, M.D., Ph.D., the chair of the Department of Neurology and an international leader in Parkinson’s disease.

“UAB has a long history of important research in Parkinson’s disease and the clinical research core is an important next step in efforts to develop therapies to treat or prevent Parkinson’s,” said Standaert, the John Whitaker Endowed Chair of Neurology at UAB.

The Alabama Udall Center was established by an NIH award of nearly $10 million over five years. Standaert says the center is focusing on the role of inflammation and immune response in the progression of Parkinson’s, which is a new approach to the disease.

“Parkinson’s is a progressive disease, which means it gets worse over time,” Standaert said. “There has been a lot of research on the triggers of the disease, such as genetics and environmental causes. We have gained a good understanding of how that fire gets lit, but we don’t know how it spreads. Our efforts will concentrate on the role of inflammation in the brain as a driver of the worsening of the disease.”

Standaert says the Udall designation builds on a previous P20 grant to UAB from the NIH’s National Institute for Neurological Disorders and Stroke, which established a core collaborative team in Parkinson’s, demonstrated the university’s ability to recruit patients for clinical studies, developed and standardized models and methods, and created a process to study immunomodulation in animal models and humans with early disease. 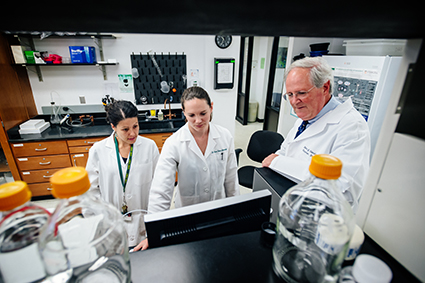 The UAB center has three primary research efforts. Standaert leads a clinical study of 60 newly diagnosed patients with Parkinson’s and 60 healthy controls looking for signs of inflammation very early in the development of the disease.

A second arm of the Udall Center is focusing on immunology and the role of the immune system through basic research. This arm, led by Etty Benveniste, Ph.D., Charlene A. Jones Endowed Chair in Neuroimmunology and professor in the Department of Cell, Developmental and Integrative Biology, will examine a signaling pathway known as JAK/STAT as a novel therapeutic strategy for Parkinson’s. The JAK/STAT pathway delivers communications from outside of a cell to the cell nucleus.

The center’s third major research focus is on the LRRK2 kinase enzyme, which has been studied extensively in the lab of former UAB researcher Andrew West, Ph.D. West, now at Duke University, continues to work in collaboration with the Alabama Udall Center.

Laura Volpicelli-Daley, Ph.D., assistant professor of neurology, leads an animal models core in support of the second and third arms of the center’s research.

Udall Centers are very involved in community outreach and education of the next generation of Parkinson’s clinicians and researchers. The Alabama Udall Center will work with the Parkinson Association of Alabama, the American Parkinson Disease Association, and other regional and national organizations to enhance communication between scientists and the community of people affected by Parkinson’s disease. The Udall Center will also provide training to physicians and health care providers on state-of-the-art approaches to diagnosis and treatment of Parkinson’s disease.

Parkinson’s affects about 1 million people in the United States and 10 million worldwide.

“The cure for Parkinson’s disease still remains elusive; but if we can find a way to slow or stop the progression of the symptoms, we can help many people live full and active lives. We believe that the studies the Alabama Udall Center will conduct on the role of immune signaling can lead to the discovery of these desperately needed disease modifying treatments,” Standaert said.