New York magazine writer Rebecca Traister will hold a lecture for the UAB community to discuss how women’s anger has been channeled and perceived over the years. 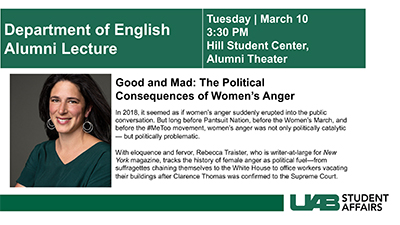 The University of Alabama at Birmingham’s Department of English will host “Good and Mad: The Political Consequences of Women’s Anger,” a lecture featuring writer Rebecca Traister to discuss how women’s anger has been channeled and perceived over the years. The Tuesday, March 10, event will be in the UAB Hill Student Center’s Alumni Theatre at 3:30 p.m.

In 2018, women’s anger erupted into public conversation. Long before the Women’s March, and the #MeToo movement, women’s anger was a political catalyst and politically problematic. The story and cultural significance of female fury shows the long history of resentment that has concealed women’s rise to political power in America, as well as how anger is perceived when it comes from women instead of men. Traister tracks the history of female anger as political fuel — from suffragettes at the White House to office workers’ leaving their buildings after the Supreme Court confirmation of Clarence Thomas.

Traister is a writer-at-large for New York magazine. She is a National Magazine Award winner who has written about women in politics, media and entertainment from a feminist perspective. She is the author of “Good and Mad” and “All the Single Ladies,” both New York Times bestsellers, and the award-winning “Big Girls Don’t Cry.”

Twice a year, the English Alumni Lecture series brings in nationally prominent writers and scholars to talk about ideas and issues related to the study of English. This lecture is co-sponsored by the UAB Institute for Human Rights and the Department of Political Science and Public Administration.

The lecture is free and open to the public.